The ancient Babylonians made promises to their gods at the start of each year that they would return borrowed objects and pay their debts. The Romans began each year by making promises to the god Janus, for whom the month of January is named. In the Medieval era, the knights took the “peacock vow” at the end of the Christmas season each year to re-affirm their commitment to chivalry.

At the end of the Great Depression, about a quarter of American adults formed New Year’s resolutions. At the start of the 21st century, about 40% did. A 2007 study involving 3,000 people showed that 88% of those who set New Year resolutions fail, despite the fact that 52% of the study’s participants were confident of success at the beginning. Men achieved their goal 22% more often when they engaged in goal setting, (a system where small measurable goals are being set; such as, a pound a week, instead of saying “lose weight”), while women succeeded 10% more when they made their goals public and got support from their friends.

I am a “To Do List” maniac – one of those that actually adds things already accomplished to the list just so I can mark it off as finished. I rarely have trouble setting goals. My problem is learning when to stop. Different from New Year’s resolutions, Lent is a time to give things up. Some people like to use this time as a cleansing and give up the same thing every year; but if you like the variety of giving up different things, you can run out of ideas after a certain age.

My trouble was that after giving something up for so many weeks, I had gotten over it already and found the absence of this previously fond action had become permanent. In 2000 I gave up listening to music in the car on the premise this would give me alot of time to deliberate things I should improve upon in my life. To this day I rarely turn on the radio in the car and spend countless hours in complete silence. It has made me very careful about resolutions.

Nonetheless, I am a firm believer that resolving to do something…anything to improve yourself is a good thing. Years ago I gave up the 3 resolution rule and decided if it was only one resolution I was fine with that as long as it was a worthy goal. I’ve also given up on goals that are lofty, like learning to speak a new language. Oh how I would love to speak French and Spanish but it’s not at the top of my list right now. Two years ago I decided I needed to do something that would make my legs stronger. My husband suggested Kung Fu. ??? Well, it sounded interesting so that became my resolution.

I must admit, my resolutions don’t always fall on the first of the year. For many years now they have come at the beginning of summer, which usually coincides with my training for a fall marathon. Why not make them at a time that is appropriate to your life? So, I began Kung Fu that summer and found I absolutely love it. Now in my 3rd year I have added Tai Chi lessons as well and can imagine I will study both the rest of my life. Two years ago my goal was to add cycling to my training regimen, and this year to add short races to my racing schedule – 5k and 10ks specifically.

I have just finished my first 10k of the year, the Hot Chocolate 10k. Touted as the flatest course in the area I was excited but very nervous when I went to bed last Friday night. At 5:00am when the alarm rang, I had already been awake since 3:40am. We had an ice storm on Friday and the temperature was only 29 degrees Saturday morning when we left home. Through the night I had decided to back out of the race a dozen times and even now sitting in the car I was saying to my husband, “I will never run another race in the winter!” He laughed and told me I complain about every race. Even if its cold, I surmised, at least it will go by fast and it shouldn’t be too hard since it will be fairly flat.

We were putting the address into the GPS app on our phone when it finally sunk in. The start of the race was on Hill Street. No, it can’t be. But yes, it was. We drove up a monstrous hill to the school hosting the race and there was the finish line at the top of that hill. While my time was not as good as I had hoped for, it was good enough to earn an overall first place spot and a $75 check! WOW! The first time I’ve ever won money running! 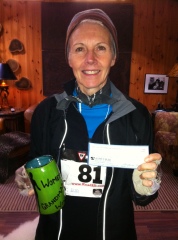 Every resolution doesn’t begin or end this well. In September 2011, we moved to Ecuador and lived at the base of the Cajas Mountains overlooking the beautiful little city of Cuenca. On my first drive up the Cajas (between 3100 and 4450 meters above sea level, or 10,170 – 14,600 feet), I immediately dreamed of riding my bike to the top. I soon realized my naivety regarding the rigors of training at altitude after a 7 mile run that landed me in the hospital. What followed was a new resolution to merely survive a run down the mountain and the eventual walk back up the dirt roads to our home. That alone was grueling enough.

My Kung Fu master encourages us to set a resolution at the start of the Chinese New Year as well. He meditates for an hour each day in the traditional Shao Lin standing posture. As with many things he has mastered, our reaction is one of awe and wonder. It’s not uncommon for us to repeatedly ask how we will ever accomplish the same levels of training he has perfected. He always replies – start small and build on your successes.

Last week he told a new student the same story I’ve heard many times now in class. If you start lifting a calf when it is young and continue to lift it as it grows, eventually you will be able to lift the cow. This is the same strategy used in marathon training. How can you conceive running 26.2 miles when the longest run in your first week of training is 3 miles? But you build up ever so slowly and do exactly that. I heard an interview of Michael Phelps when he said the same of swimming for hours at a time. I was amazed that someone as talented as Phelps would be skeptical of his training program leading him to an hours long swimming session. But, it defines the debate of human nature. Some of us find it difficult to summon the discipline we desire, some have more confidence but fail in other ways. We all just have to take it a little bit at the time….for life.

One thought on “This is a New Year.”