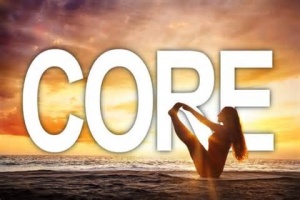 When I started running, I didn’t worry about anything but running. There were no cross training days, no worries if my core was strong. I woke up and ran the number of miles written in my calendar. That’s it. If you asked me what I was, I would have said, “I am a runner.” Yes, I was a runner through and through.

Ignorance is bliss. And, with knowledge comes responsibility.

I don’t know how or exactly when it happened, but I became aware that runners needed strength training. This knowledge created more layers to my identity as a runner, more depth. As with everything else, I poured myself into this new task. There were books to read, research to complete. Time was of the essence – I needed to be a strong runner.

I found Ryan Hall on YouTube demonstrating his core strengthening routine and it became my very own. Over the years, I included exercises I learned in Kung Fu, tweaked things a little here and there, added weights and plyometrics.  All of that was just fine…..until last week.

There seems to be a requirement for even more layers to my running…. I had become bored with my strengthening routine and realized it was no longer getting me as far as I’d like to go.

Some time ago I read about Coach Jay Johnson, although I must not have been ready for quite this big a change. I let the research go in one ear and out the other. In an interview by Jason Fitzgerald of Strength Running, he mentioned Coach Johnson and the Core H routine.

Jason, also a coach, author and 2:39 marathoner, suggests doing about 10 minutes of strengthening exercises daily and recommended some of Coach Johnson’s routines. My strategy had been to set aside 30-40 minutes 2 or 3 times a week, so 10 minutes a day appealed to me.

Part of my problem was the exercise time on these 2-3 days could be easily interfered with – said differently, easily cancelled. Running takes priority so if something came up and there was a reduced amount of time available, the strengthening is what got cut. Not to mention the fact that these exercises were no longer creating a burn.

I took a look at Coach Johnson’s web site one morning while I was eating breakfast to see what it was all about. In the same amount of time that it took me to eat a bagel, I watched Coach Johnson’s student go through the Core H exercises – the whole routine, And she was working hard. Each exercise was performed for one minute – sounded easy but was obviously challenging.

I tried it that very day.

The new schedule was to stretch, run through my Tai Chi forms and whatever Kung Fu I should practice before my run (approximately 15-20 minutes), go for the scheduled run, come home and do the 10 minutes of strengthening.

It’s been a great change for my schedule. Ten minutes of work after the run is nothing, but the workout is intense and these exercises help build strength in a lot more than just the Abs. I feel the burn.

feeling good, being uncomfortable and suffering