When we moved to Ecuador, we shipped two 40-foot containers of stuff – furniture, china, clothes, a refrigerator, dishwasher, linens, my piano. Immigration held those two containers hostage for about 12 weeks during which time we sat on outdoor furniture, watched TV using our iPads and went out to eat for every meal.

When we finally negotiated their release, the containers were scheduled for delivery to our home on top of a mountain in San Joaquin. What an exciting day that was to be.

There were two ways to reach our house – two very bumpy roads or one super bumpy road, neither of which would support two trucks hauling 40-foot containers. The answer was for the trucks to park on the side of the highway, unload into a pickup truck and then up the bumpy roads.

A llama lived in our neighborhood, sheep grazed at the top of the driveway and cows and horses roamed free but none of these were to be seen on moving day. My husband also makes himself scarce on moving days and true to form he was back in the states the day the containers finally arrived.

So my friend came up from the other side of town to help me supervise all the stuff being unloaded, loaded and unloaded again. When the day was over, we sat on the couch in awe at everything in that house. Neither one of us thought I would ever get it all to fit.

Instead of two 40-foot containers, we had two short trucks moving our stuff this week – a large moving van would never make it up our drive. In fact, one of the trucks almost didn’t make it when its front tire started sliding over the edge – a straight drop down to the creek. For 45 minutes we coaxed that truck around the turns and through the wooden gates to our house. Furniture, china, clothes and my piano all came off the trucks and into the house.

My piano started its journey with me in North Carolina many years ago when I was a single mom living in Greensboro. It was rescued from a performing arts center where many a grand musician played it and a few danced on its top. Since then it has lived in eight houses, been in storage twice and on a boat when we moved to and then back from Ecuador.

My mother taught piano lessons when I was in grade school to bring extra money into our home. After school I would sit in my bedroom listening to her teach her students. When she went to the kitchen to prepare dinner, I would try to play the songs from her student’s books. Mother would yell out from the kitchen, “That was wrong, do it again.”

As a high school student I participated in piano competitions, playing the song I had chosen over and over until I could play it all the way through with no mistakes. I spent hours in the little front room where mother had put the piano tirelessly repeating every measure until I could express the essence of the song using the keys of that old piano.

It is truly a wonderful experience to have a passion so strong for something. To build your life around it, to mourn it when there is no time, or an injury keeps you away from it, to pour your heart and soul into the perfection of this thing.

When I decided to begin writing about the passions of my life, most specifically running, it was in hopes that I could encourage others to also pursue their passion, whatever it may be.

Perhaps for someone along the way this will be true. 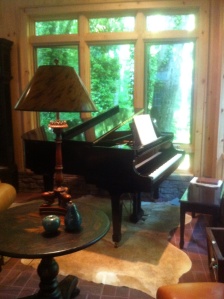