Our morning started with a drive through the Nantahala National Forest. It was foggy and we could barely see the vast expanse of Fontana Lake as we passed the scenic overlooks. The road cut a path through the forest with back-to-back hairpin turns. We were almost level with the treetops on the right side of the road because of the severe drop-off on the other side of the guard rail while the rugged rock face on the left pushed the treetops up above us hundreds of feet. It was eerily beautiful.

We found a dozen cars parked on either side of the road once we reached Fontana Dam and knew we must have found the starting line of the race. The race course was touted to be relatively flat along the shores of the Little Tennessee River below Fontana Dam. It was one of those no-frills kind of races… the kind of race that attracts runners who don’t care about the frills anyway. We were just there to run. 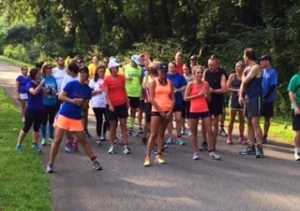 My plan was to actually train for this 10k, but then school and work began to interfere with the calendar and I’ve found myself two weeks into marathon training already.

The course consisted of two roads running along-side a creek that fed into the river. Both roads ended at the dam where we made a turn and ran back up the road, across the bridge and down the other side. There was a slight hill on both sides of the creek where the roads met the bridge – making the course relatively flat. These hills seemed insignificant the first time we ran them, but I’ve never met a hill that was insignificant in the second half of a race, especially when it falls just before the finish line.

The race started at the base of the first hill and by the time we had reached the bridge I had broken through the small crowd of runners and found myself the 8th runner. I maintained that spot for the entirety of the race.

It wasn’t easy to run a personal best at this point in my running life, but I wasn’t gasping for air and my legs didn’t feel the customary heaviness or lactic acid buildup I’ve felt before. I credit these changes, and the ability to maintain a steady pace throughout the race, to all those slow runs that were promised to build aerobic capacity.

It wasn’t until we looked inside our little brown bag of race goodies that we realized the beautiful roads that brought us to this race were part of the “Tail of the Dragon“; a famous road with 318 turns in 11 miles. It is the location of the Cheka Dam where Harrison Ford jumped from in the movie The Fugitive. The dam and old single lane bridge were also in the 1974 movie Two Lane Blacktop.

There are millions of breathtaking spots in this beautiful country of ours and Western North Carolina is among some of the best.

We traveled back home through those hairpin turns, the sun now shining bright along the lake and the mountains in the distance, and my heart could not have been more content. Looking back on 7 years of competitive running I can see as many twists and turns as the road I was driving, but a road that has taken me to lots of new places.

You may believe it is not possible to make improvements once you reach a certain age – that perhaps it is a win to simply maintain. I submit to you that it is never too late to accomplish new things. 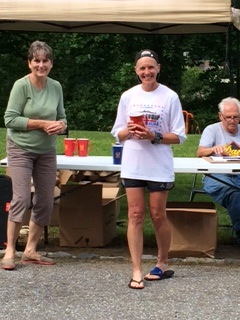