We stood in a circle that spread across the gym – all but one of us standing on an upside down paper plate. Paul was in the middle explaining the rules of the game, “The person in the center of the circle will begin by saying, Have you ever…, finishing the sentence with something you’ve done before. For example, Have you ever been to a baseball game?” If you have ever been to a baseball game, you would run as fast as possible to the opposite side of the circle and find an empty plate to stand on. The challenge, if you don’t get creamed by somebody else running to the other side, is to jump onto that plate before somebody else does leaving you the only person without a plate to stand on. That’s when you go to the middle and think of something you have ever done that will be the same thing that at least someone else in the group has also ever done.

On my first trip to the middle, I looked around the group and noticed several of the guys with their keys hooked onto their belt loop. I distinctly remembered doing this once and it got me out of the middle quite easily. It was only the first of many times in the middle for all of us and a gazillion more “Have you ever…?”

It had been on the way to school the day before that my own version of “Have you ever…?” played out. Wednesday is Water I and class was scheduled at Fontana Lake, the sight of more than one adventure for me this summer. Stephan taught us how to properly load the boats onto the trailer before we left campus in the big, white school van. We loaded canoes and kayaks and tied them down tight with no loose ends of rope left dangling that would wreck the tires, the boats or worse. 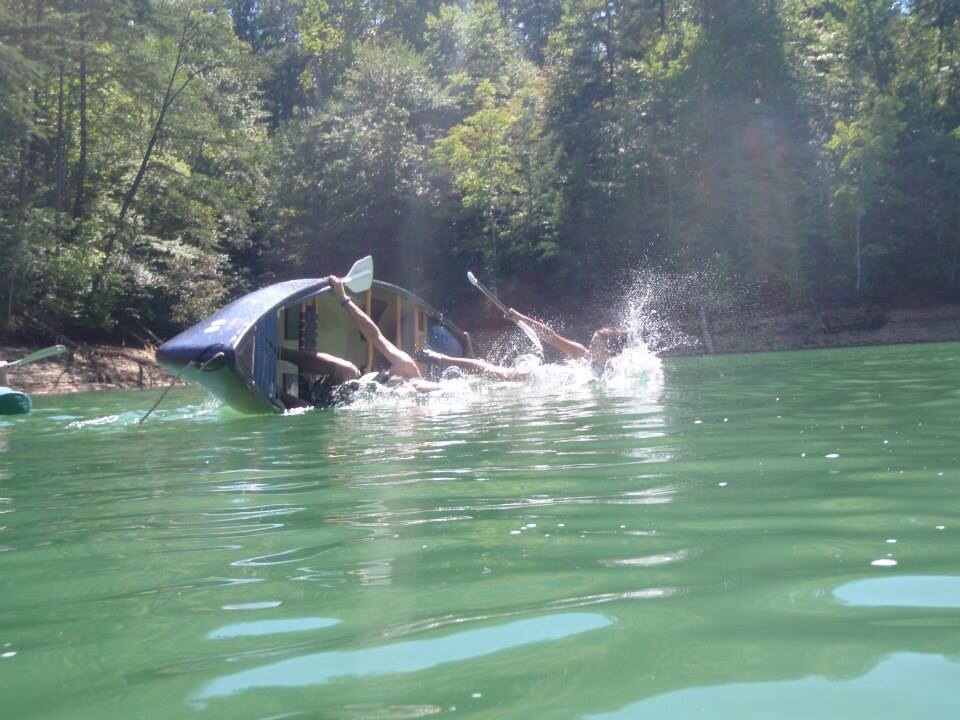 It was hot and the water surprisingly warm. Stephan taught us to inflate the raft properly, how to use our paddles, how to get in the boat (I fell in), and we all tried a “self rescue” – which meant we pulled ourselves out of the water and into the boat, except for the girls who could not manage the upper body strength to save our own souls. Luckily this isn’t a critical fail unless we want to be a career raft guide.

The entire class climbed into one of the canoes so Nicole could take our picture. The canoe sank. We flipped the raft over (we all went overboard) and learned to flip it right again. Some of us relaxed while a few brave classmates flipped the raft front over back. It was quite the feat. Then Johnny and I were tasked with fetching the paddles which had floated down the lake while we were flipping the raft. I thought it would take me the rest of the day but finally we reached the paddles and hauled them back to shore.

There was only one most frightening part of the class: extracting ourselves from a capsized kayak. It had been on the drive to class that morning that I had tried to remember the last time I had been swimming. The conclusion, amazingly…. it must have been decades. Then I tried my best to recall when I would have had the recent opportunity to hold my breath under water. Good lord.

There I sat in the kayak attempting to summon my nerve. Dell had just capsized and claimed it wasn’t scary at all. I wondered in which decade she had last been underwater swimming. She obliged when I suggested maybe someone should be close by…. stopping short of saying, “in case I drown!”

I looked down at the water beside the kayak and on purpose turned my kayak over. The process was to lean forward, grab hold of the kayak behind your back, push yourself out, do a forward flip and swim away.

This week’s test: Are you smarter than a raft guide?