She was the goddess of water in Greek mythology. Both Zeus and Poseidon loved her and did their best to win her hand in marriage until Prometheus warned them of a prophecy that her son would become greater than his father. She married a mortal king instead, and dropped their son into the river Styx to make him immortal – holding him by the heel of his foot.

I had exercised patience regarding the time required to recover from a dislodged peroneal tendon, but when the swelling subsided and I could no longer move the tendon around with my finger there was still a hard bump on the back of my heel. Even relatively easy exercise made it sore. It was time to visit the doctor.

My husband and I sat quietly while the doctor examined my heel. As he left to order the x-ray he mumbled something about a pump-bump. My husband immediately took to his phone and by the time the good doctor returned we had discovered everything there was to know about Haglund’s Heel.

Dr. Haglund was a friend of Dr. Roentgen, the inventor of the x-ray. Haglund began researching the boney anatomy of humans for his dear friend, and came up with a fairly common deviation of the heel bone, which became known as Haglund’s Heel (also Hagulund’s Syndrome or Deformity).

This deviation is associated with decreased range of motion of the ankle and increasing age, typically hitting women in their 40s, 50s, and 60s after years of wearing high heel shoes. Jumping, running and navigating stairs can exacerbate the condition making inflammation and heel pain worse. It develops gradually, but we usually take notice when the tendon becomes inflamed. In many cases, especially with runners, Haglund’s Heel evolves into Achilles tendinitis.

Insertional Achilles Tendinitis is a common overuse injury among athletes causing stiffness in the heel especially in the morning, pain along the tendon that increases with activity and possibly swelling. A bone spur gradually develops around the tendon that can cause irritation (bone tends to generate new bone in an attempt to heal itself), and eventually the tendon may calcify and harden. 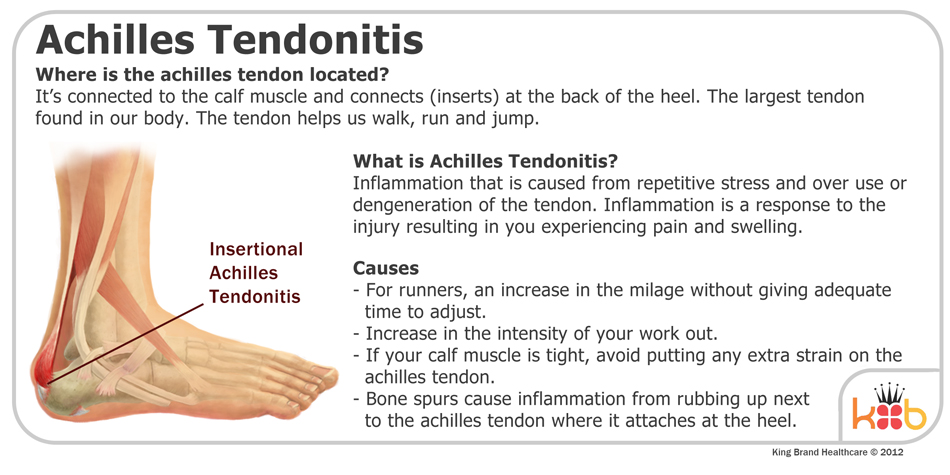 Why it hurts: When a healthy tendon experiences an increased load, it responds by increasing its stiffness to handle the greater demand as it also increases the production of collagen cells. Researchers propose that this non-inflammatory cell response is an attempt by the tendon to increase the cross-sectional area to better handle the load. This short-term adaptation is reversible if the load is diminished or the tendon has a chance to rest before the next stress is applied. Over time a healthy tendon adapts to the stress by growing larger and stronger. An overused or diseased tendon does not recover from the stress and the injury progressively worsens.

Tendinitis is inflammation of the tendon (the suffix “itis” indicates inflammation), in this case of the Achilles. The condition lasts about six weeks although most practitioners view tendinitis as the first in a continuum of tendon injuries that subsequently increase in severity (you’ll also see it spelled tendonitis). If you feel pain in your heel, this is the time to take action.

Tendinosis is a non-inflammatory degeneration of a tendon that can include changes to its structure or composition. These changes often result from repetitive micro-traumas or failure of the tissue to heal and will likely require several months of treatment.

The suffix “pathy” is derived from Greek and indicates a disease or disorder. Tendinopathy is the term also applied to a chronic condition that fails to heal. For example, a runner who has suffered a hamstring tendon rupture that does not heal properly may be diagnosed with tendinopathy.

Insertional Achilles Tendinopathy is inflammation, and later, degeneration of the tendon fibers that insert on the back of the heel bone. Since the Achilles tendon connects the calf’s gastrocnemius and soleus muscles to the calcaneus, or heel bone, by the time you’ve reached the Achilles tendinopathy stage you will likely also notice reduced strength in the calf muscles.

Treatment: The Achilles’ tendon is exposed to greater amounts of strain in the dorsiflexed or upward position where the forward section of the tendon is exposed to low loads. Researchers suggest the lack of stress on this forward aspect of the tendon may cause that section to weaken and eventually fail. The treatment goal of insertional Achilles tendinitis is to strengthen the forward-most aspect of the tendon, which is accomplished through a series of eccentric exercises.

The Alfredson Protocol: The story goes that Hakan Alfredson, an orthopedic surgeon and professor of sports medicine in Sweden, developed Achilles tendon problems in the mid-1990s. When his boss refused his request for surgery because the injury was not yet advanced enough, Dr. Alfredson attempted to deliberately aggravate the injury with a series of exercises. Instead of getting worse, however, his injury disappeared.

These exercises, now known as the “Alfredson protocol” are considered the most effective first line of treatment for Achilles tendinopathy. The eccentric movements are designed to physically stimulate the cells in the tendon as they move relative to each other, causing the cells to initiate a tissue repair process. 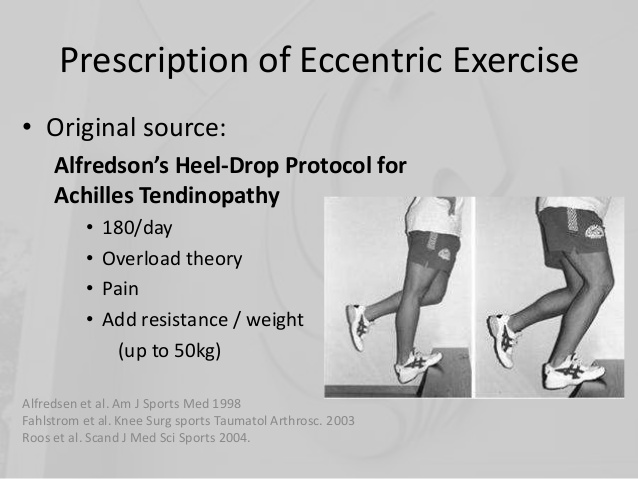 Perform 2 sets of 20 reps with the knee straight, which strengthens the gastrocnemius muscle, and another 2 sets of 20 with the knee bent to strengthen the soleus muscle. Repeat the exercises twice daily for 12 weeks. If the effort become too easy, add weight to increase the load.

Note: as with everything science, there is a corresponding study that found no difference when performing the heel drop using a straight knee only, and performing the exercise from both the straight and bent knee position.

LBM: Once daily apply firm but comfortable pressure with the lacrosse ball while rotating the ball over the tendon.

The CBT process: Firmly wrap a floss tape around the Achilles tendon as well as the gastrocnemius and soleus muscles starting at the heel (using a 75-90% stretch) and finishing just below the knee. (In the referenced study, a black Theraband© was used.) Perform a ‘flossing motion by slightly shifting weight forward and backwards over the back foot and ankle in a standard soleus stretch position. Perform 3 sets of 10 reps daily. 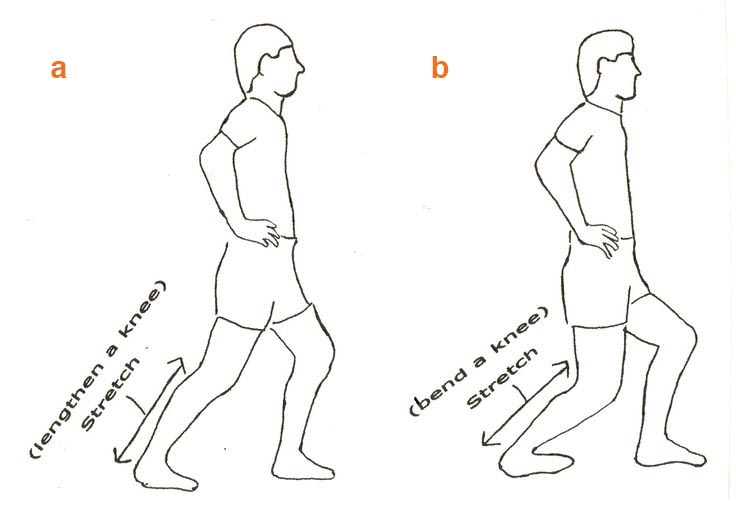 I’ve followed the exercise and massage protocol for 4 weeks (although I will admit that I have performed the flossing motion without the band). After not running one step for several months (because it hurt), I ran three times last week with no pain during or after the run. My results have been similar to the results achieved by the test subject at this same interval in the study. At the study’s nine month follow-up, the test subject was exercising up to nine hours each week with no pain. It would be premature for me to claim victory over this injury, but I am cautiously optimistic.

After spending most of 2018 following the exercise, massage and icing protocol daily, and tweaking my running schedule (varying mileage & days of rest between runs), I threw in the towel and quit running in early 2019. The Achilles Tendinitis eventually resolved, and I regained strength in my calf. Without the Haglund’s, I’m confident I would have made a full recovery. However, the bony protrusion of Haglund’s aggravated the soft tissue of my heel causing every run to be painful, and it could have eventually damaged the Achilles’ tendon. The swelling and stiffness returned after every run making it painful to walk for days.

Although some runners have learned to run with Haglund’s, it’s a painful existence that never improves. In fact, most runners will eventually develop Haglund’s in both heels. After reading their accounts, it also seems possible that Haglund’s could be the cause of other problems due to the inevitable compensations we make due to injury. Surgery is an option, but it’s not pretty. Recovery ranges from six months to a year or two, and there’s no guarantees even still. At 60 years old, I decided to adapt.

2 thoughts on “The Pump Bump and Achilles Tendinitis”