John, the contractor, stopped by on an early Friday afternoon in December 2018. He sank down into my husband’s chair and casually talked to us about our vision for the one-room addition to our cottage. By the time he left, I realized our casual conversation had covered every important design decision about the project. We would have a brick floor, sliding glass doors, double-hung windows, a wood ceiling, drywall, four recessed lights, a chandelier, and two sconces. The only decision I hadn’t yet made was the color of the walls.

It wasn’t a big job, just one room and a carport, and therein was the problem. The previous three contractors had given us their best ‘what the hell’ bid. In other words, if you’re willing to pay this much money, I’ll take on your (small) project. Fortunately for us, John actually seemed excited about doing our little project, and he gave us a fair bid.

A few weeks earlier we had hired a local designer to draw up the plans for our new room, including where and how it should attach to the house. The challenge was that the house sat too close to the property line on both sides, and the back of the house was essentially a mountain of trees. Ultimately, the best answer was to remove the mountain and the trees behind the house to create enough level space for the addition. Excavation wrapped up in March, and construction began the first day of May.

September 2017: The space to the left of the cottage was originally a large drainage ditch that was overgrown with foliage and trees. One of our first projects was to install a new drainage system, fill in the ditch, and create a driveway. During the process, the excavator uncovered enough rocks to cover the entire bank by the driveway. 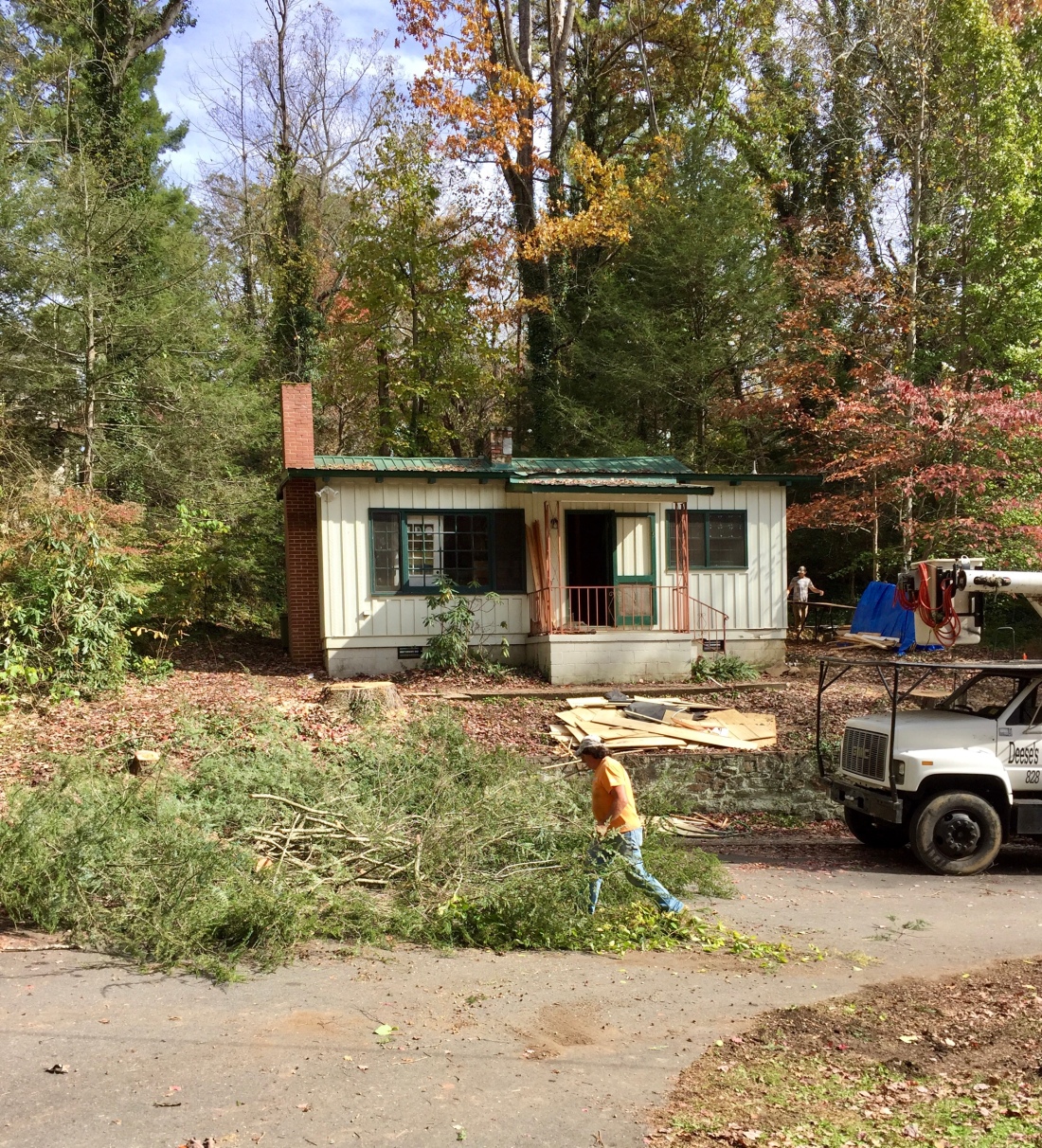 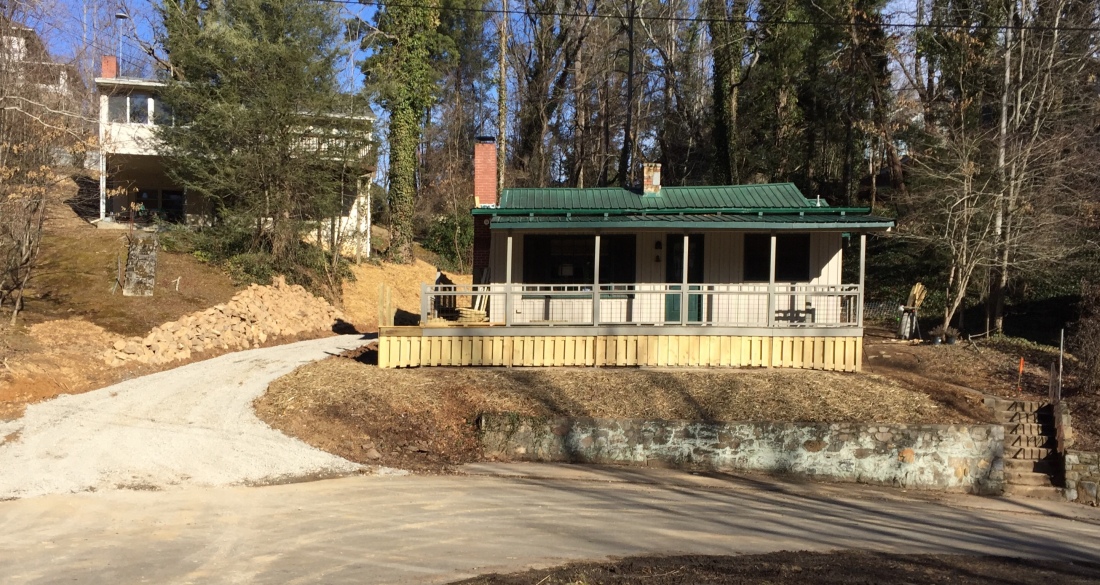 March 2019: after removing most of the trees behind the house, the excavator began hauling out enough dirt to create a level area adjacent to the house. 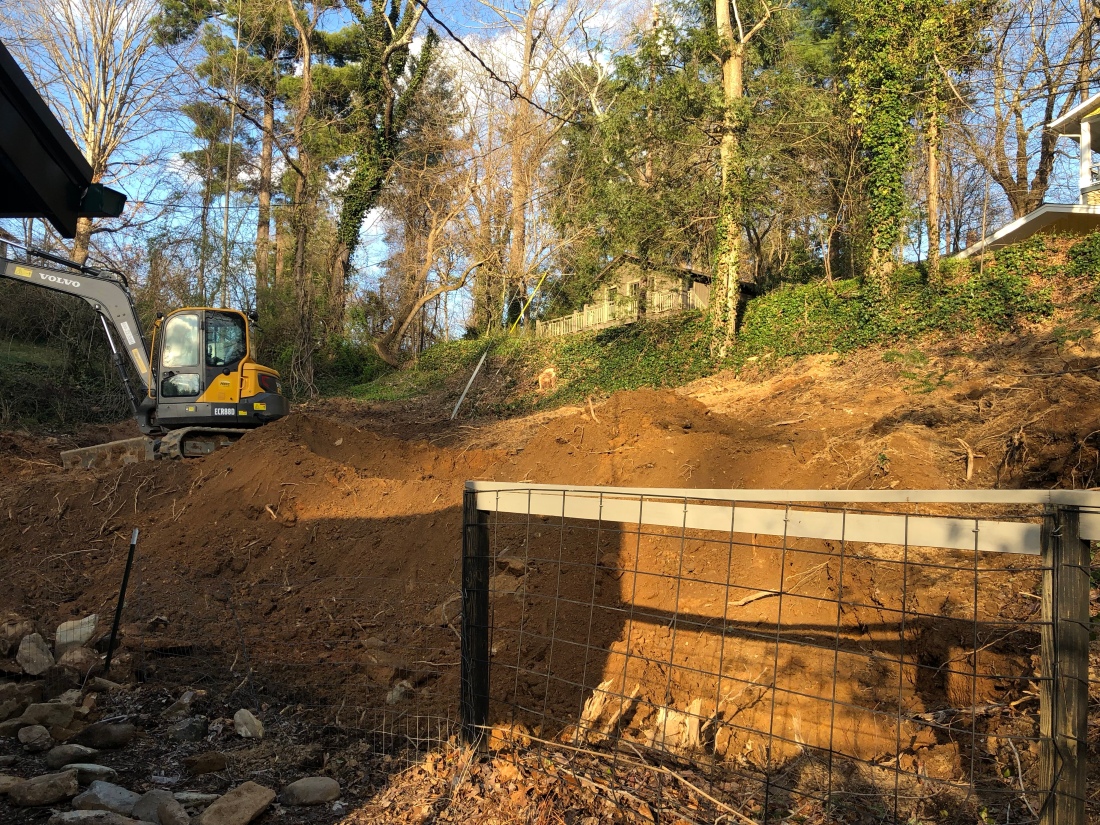 After burying a new propane tank and moving the HVAC, the foundation was poured on the first day of May. A few weeks later, the addition was closed in.

Finishing the interior always seems to take the longest time in any project, but our delays began to snowball. The electrician got held up by delays on a different job, which messed up the schedule for insulation and then drywall, which delayed the painting. The brick floor was supposed to be finished over a weekend, but it took more than a week. The gutter company was delayed for months as pieces of gutter lay strewn across the yard all summer. By late August, there were a multitude of little things left straggling.

My husband was thinking we needed an impending event to help move things along. He dreamed up a ‘party’ that we would have scheduled before construction slowed to a crawl, and threatened that we were moving in whether they were done or not. They weren’t done.

Throughout all these months of construction we had anticipated this room’s major function would be to hold my piano, a wall of bookshelves, and a couple of comfortable chairs – it would mostly be a music room. Once the windows were installed, however, we realized how bright and quiet it was at the back of the house. We measured the family room furniture over and over again, plotted out various furniture layouts, and finally, it seemed possible to relocate the family room to this new room. The added benefit of this strategy is that it allowed us to create a dining room adjacent to the kitchen at the front of the house.

To make the furniture layout work it was necessary to find smaller chairs, and to replace our oversized cocktail ottoman with something smaller. E.J. Victor had a showroom sale in July where I found the perfect chairs, and we used a smaller bench that had been in storage as our cocktail ottoman.

We found the bookshelves and the chandelier on Wayfair. The walls hadn’t been painted when the bookshelves arrived, and they spent a full week outside under the carport before we could move them into place. We weren’t sure we had accounted for the little piece of trim molding when we measured the bookshelves’ height, and we held our breath as they were positioned against the wall. They fit. thank goodness. We bolted them to the wall – just in case.

Regarding the color of the walls, I had narrowed my choices to about a half dozen colors, but then found a beautiful pale green on the oops paint rack at Lowe’s (I know it totally looks blue in the picture above – can’t explain that). When that pale green paint went onto the walls, we thought it was stunning against the backdrop of the garden outside the windows. Goes to show that one person’s oops can be another person’s treasure.

After we had already moved into the room, I remembered a piece of leftover fabric from an upholstery project at our last house. It was just large enough to replace the not-so-very-dog-friendly ivory seat cushion that originally came with our sofa. The drapes are from the same E.J. Victor showroom sale, and are made from a coordinating fabric to one of the chairs I bought that same day.

So the paint came first, but the chairs and drapes matched the paint, and the sofa cushion fabric had been there all along, but forgotten – even still, everything matched. There’s something to be said for always buying things (or colors) that you love.

This one-room addition has completely changed our little cottage and how we live in it. We’ve wondered if we would have created a slightly larger room had we known we would use it as our family room instead of a music room? A few more feet might have given us more options, but it’s cozy (like the rest of the cottage), the acoustics are great. . . and we love it. 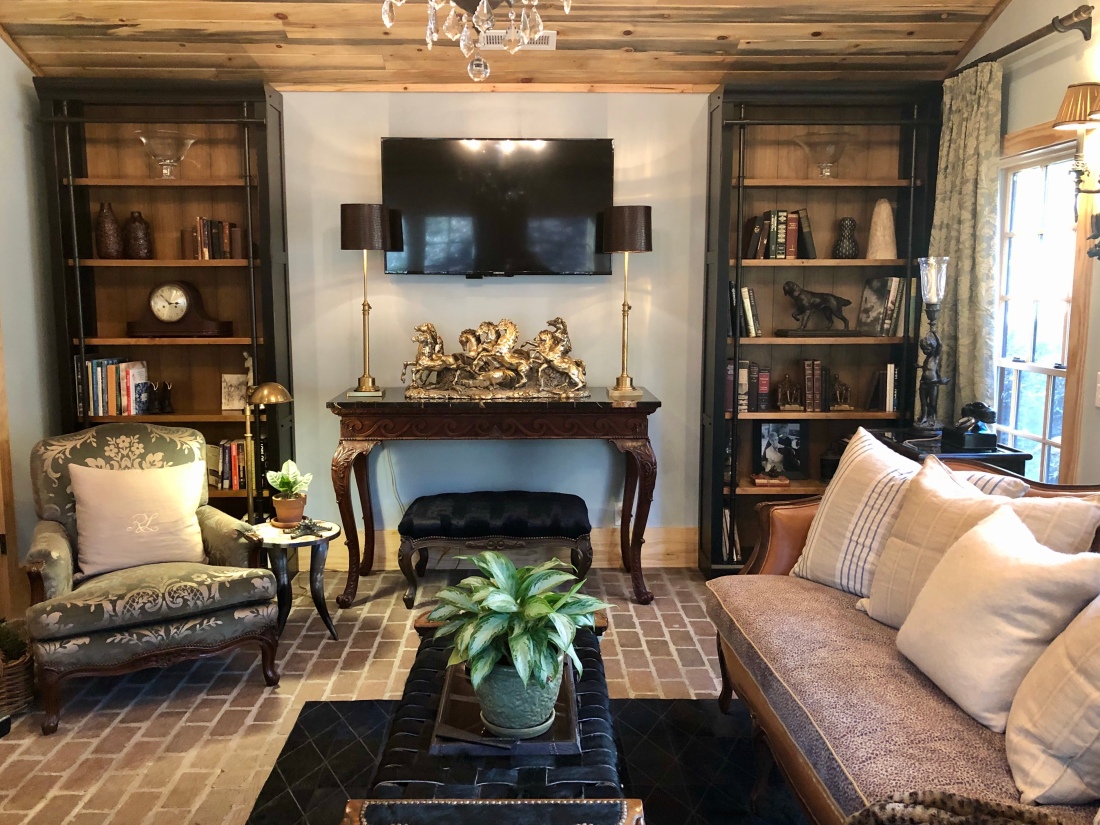