I’m realizing that lots of us experiment with the running-every-day-bug for at least some period of time. The only wild card seems to be how long the experiment will last.

Mine lasted just shy of two months. I didn’t get hurt. It wasn’t miserable in the least. But I have no desire to run the experiment again any time soon.

The same goes for running high weekly mileage. Everyone from the elites to everyday running gals like me must have pushed the envelope a bit on how much is too much. It’s a discussion for another day, but the process warrants an observation.

If you’re in control of your own running agenda, as most of us recreational runners seem to be, the push for higher mileage is tantalizingly more attainable if you run more and more often. The high mileage quest in and of itself begets a strategy of running every day – for what we initially assume could last forever. Our bodies, our sanity, or our spouse will usually inform us that it’s time to stop.

Jonathan Savage is a fairly well-known ultrarunner from Charlotte, N.C., and writes the blog fellrnr.com. I enjoy his blog because, like me, he tends to research the bejesus out of whatever ails or interests him at the time – including his own personal experiments. Aside from these interesting revelatory-type posts, he has also kept a monthly training macrolog since 2010, which exposes the success, or failure of these experiments in real-time.

Savage is a self-proclaimed 4 day/week runner, something he admits is rather unusual for a competitive ultrarunner. In 2011 he decided to try running once/day, every day for 6 months. He revisited the experiment again in 2014, except that he reduced the distance of each run while increasing the frequency to 2-3 times each day, every day.

Although I’ve never heard of training three times a day, two-a-days are not unusual for competitive runners. One of the many benefits of training twice on some days is the ability to complete multiple long runs during the week while presumably protecting the body – not to mention not everyone has the time to run several hours before or after work. Dividing the run into two sessions is more manageable on several fronts.

Now that I’m in this year’s base building phase, and feeling the inevitable focus on building weekly mileage, I naturally find myself thinking of adding as many running days into the week as possible as well – which means I’ve spent oodles of time researching the pros and cons of back-to-back running. As with everything running, the answer seems to be multiple choice.

My last untold secret from last year’s marathon training is that I only ran 3 days/week for the last 8 weeks before the race. It was refreshing. I felt rested and energized for every run, mentally fresh. I’ve argued for years against running every other day, but it worked out just fine.

My experience with running 4-7 days/week, however, is that there is also a benefit, both physically and mentally, that comes from running consecutive days. Some of Hal Higdon’s marathon training programs include back-to-back runs on the weekend where a shorter Saturday run is followed by the longest run of the week on Sunday. His thinking is that the combined weekend mileage (30-miles total at the peak) helps prepare you for the final miles of the marathon.

Whether it’s training your mind to run on tired legs or some physiological benefit that comes from reducing recovery time, I’m not sure. In some ways it seems similar to doing repeats with speed work. As fitness improves, you can extend the distance of the repeat and/or reduce the time between repeats to increase the level of difficulty.

We’ve all been told, it’s not how much training you do but how well you recover from it. Therein lies the multiple choices I think.

When Jonathan Savage runs 4 days/week, each run’s distance is designed to adequately fatigue himself, a distance difficult enough to require 48 hours recovery. The long runs stress the body; the rest days turn that stress into strength. Alternatively, running more than 4 days/week, thereby spreading the total weekly mileage between more days, includes more days of what we call “junk miles” – runs that barely work up a sweat and could be considered a waste of time by some.

The preference is personal I think. Do you tolerate longer single runs, or shorter runs more often?

For me, it seems to work well to run more days of lower daily mileage during the early base building phase, and then decrease the running days while gradually increasing each day’s total mileage for the marathon build-up phase.

Daniels’ Running Formula includes base building before each marathon training program, including 7 days/week of running roughly the same distance each day for 6 weeks with a minimum of 30 minutes per day.

This year I’m using a base-building schedule that starts out with 5 days of running each week where each day’s mileage remains mostly in the single digits. Later in the year I’ll reduce the days I run, add cycling for cross-training, and slowly increase the distance of each run. This is similar to the schedule I followed last year that ultimately helped me prepare for the longest distance I’ve ever run on the least amount of training. 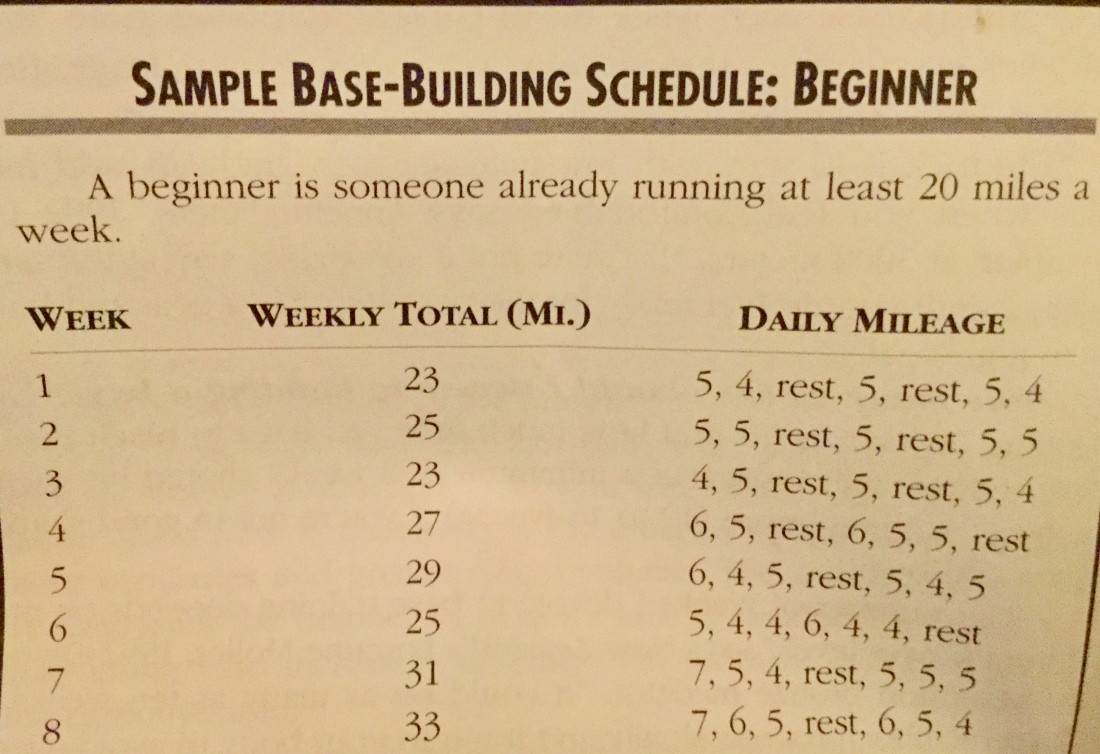 This schedule came from one of the older running books from my bookshelf, “The Runners Book of Training Secrets.” I like this format since it focuses on building weekly mileage rather than on the long runs, which will be the focus of the marathon build-up later in the year. There’s no credit for this program so I assume it was created by the authors, Dr. Ken Sparks and Dave Kuehls, Senior Writer Runner’s World.

It’s worth noting the results of Savage’s experiment of running every day. During the six month period in 2011, he typically ran 5-6 long runs per week in the range of 16-23 miles. For a few of the weeks he ran the same distance all seven days. In January 2012 he returned to running 4 days/week stating that although he felt surprisingly well physically, his psyche was suffering. In that post he explained, “Even now, it’s unclear to me how much lingering long-term impact I have from this belt of overtraining syndrome.“ When he divided the daily mileage into 2-3 runs each day in 2014, the experiment lasted all year.

There are general guidelines to keep in mind when considering a back-to-back schedule of any duration:

* If your back-to-back training also includes high mileage, know that speed work does not necessarily play well with high mileage. If you dabble with speed work, abandon it at the first sign of lingering fatigue. (Some coaches advise reducing overall mileage when focusing on speed.)

* If your schedule includes hard sessions, keep the easy days easy, but also keep the hard days hard – beware of the black hole of training (mediocrity) where the easy runs are run too fast and the quality workouts (speed work) are too slow.

* Listen to your body for the early warning signs of injury or overtraining, which may include depression.