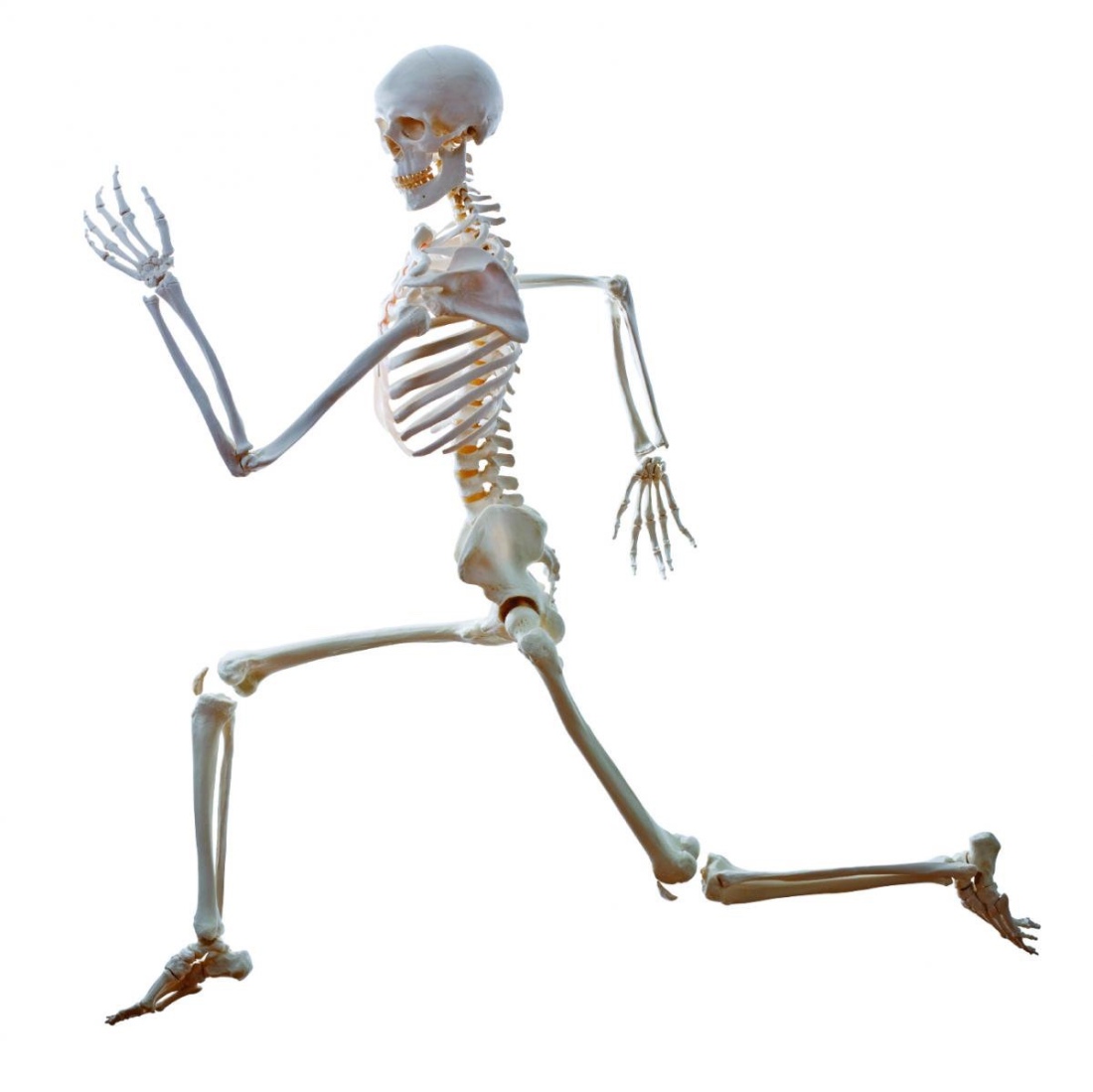 When the doctor suggested a bone density test a few years ago, I reminded him that I ran up to 60 miles a week. My bones were obviously the strongest among women everywhere. This year he urged me again to take the test so that we could establish a baseline for the rest of my life, and I finally succumbed to a full body scan a few weeks ago to assess bone mineral density (BMD).

Bone mineral density test results are reported as a T-score, which is your BMD as compared to a healthy 30-year old. A positive score through -1 is considered normal, -2.5 or below is a diagnosis of osteoporosis, and everything in between is a pre-osteoporosis condition known as osteopenia. I have osteoporosis and almost everything I thought I knew about it was wrong.

Osteoporosis begins as a pediatric disease. Intense skeletal growth and development occurs during childhood and adolescence when more bone is formed than lost. Later in life, bone loss begins to exceed the rate of bone replacement. So it stands to reason we should capitalize on building the strongest bones possible during our early years.

Wolff’s Law states that, in healthy people, bones respond to stress by reforming to better handle that stress.

In addition to diet, physical activity, particularly weight-bearing activity, is an important determinant of bone mass. The stress put onto our bones during certain sports or physical activity sends a signal that stimulates our bones to create new bone and increase bone mass through a normal process called bone remodeling.

What Happened to Me?

My favorite class in grade school was gym. There wasn’t a sport or game I didn’t love. My dad introduced me to tennis in my early teens, and I was utterly hooked. I continued to play tennis and compete in tournaments for the next fifteen years.

Eventually, after the second or third job relocation, it became easier to run than find new tennis partners, so I ran every day. . . and went snow skiing every winter, water skiing in the summer, played on three different softball teams, and lifted weights at the gym.

I ran a marathon at 47 years old, and that race kicked off more than a decade of distance running that also included the ultra marathon. It was around this same time that I started Kung Fu and Tai Chi lessons. I’d ride my bike the 15 miles round trip to class twice a week.

I signed up for classes at our local community college in my mid-50s and spent one semester hiking, another climbing, another paddling, and ran a marathon during spring break. After retiring from running last year, I’ve adopted walking for an hour or more every day. I still lift weights and spend as much time working in the garden as the day allows.

If a lifetime of physical activity improves bone density, why do I have osteoporosis? The data seems to suggest my level of exercise post-menopause may have expedited bone loss.

In healthy individuals, 60% to 80% of the contribution to peak bone mass is thought to be genetically determined while environmental and behavioral factors account for the remaining 20% to 40% – meaning, variations in nutrition and physical activity are especially important.

It’s estimated that more than half our peak bone mass is acquired during the teen years. The skeleton increases at different rates with proportionately greater growth in the limbs than the trunk prior to puberty. But in early and mid-puberty, the growth rate of the spine increases to catch up, and by the time we’ve reached late puberty overall growth has slowed. From late puberty forward we begin accumulating bone mass until around age 30 when our bones have reached their maximum strength and density, known as peak bone mass.

Women experience minimal change in total bone mass between age 30 and menopause, but go through a period of rapid bone loss in the first few years after menopause. In men, age-related bone loss occurs later and continues at a steady rate.

Weight-bearing exercise has been widely recognized as beneficial for long-term bone health. However, inherent differences in bone-loading characteristics and energy expenditure place endurance athletes at a relative disadvantage with regard to bone health compared with other athletes.

Previous research has found that endurance running has a positive effect on bone density of the lower-body. However, running for many years may be associated with lower levels of bone mass, especially in the upper body. One reason for this was identified when researchers discovered calcium intake improved bone density in the legs, but not in the hips or upper body.

It appears the benefits of running on the lower body, especially the legs, are at the expense of bone mass acquisition in the upper-body. Lower levels were observed in female runners who trained for many years.

Cortisol is a steroid hormone produced in the adrenal glands that functions to increase blood sugar, suppress the immune system, and to aid in the metabolism of fat, protein and carbohydrates. It also decreases bone formation.

Cortisol levels are increased by intense (high VO2 max) exercise and in athletes who are overtrained. In fact, runners who exceed just 19 miles per week have shown elevated blood levels of cortisol, and athletes who run roughly 56 miles (90km) per week have shown levels of bone density that are lower than those found in physically inactive individuals. For this reason, regularly scheduled periods of rest and recovery would seem even more important following high mileage training.

It is the long-term elevated levels of cortisol that is the tipping point for endurance runners, resulting in osteoporosis.

Although low-impact exercises fail to trigger the body to fortify bones, another significant discovery, often overlooked, is how much calcium leaches from the body via sweat. Besides the fluids and sodium we lose during exercise, an additional 120 milligrams of calcium is sweated out during each hour spent exercising. If this lost calcium isn’t replaced, there is an increased risk for bone loss and fractures.

According to the World Health Organization, the accumulated data indicate that the adverse effect of protein, in particular animal (but not vegetable) protein, might outweigh the positive effect of calcium intake on calcium balance.

One long-term study found that with as little as 75 grams of daily protein (less than three-quarters of what the average meat-eating American consumes) more calcium is lost in the urine than is absorbed by the body from the diet – resulting in a negative calcium balance. Even with very high calcium intakes, the more excess animal protein in the diet the greater the incidence of negative calcium balance, and the greater the loss of calcium from the bones. Studies also show that countries with a higher amount of dietary dairy often encounter more osteoporosis cases than countries with less intake.

What’s “thin?” Experts define it as a body mass index of 18.5 or below. But, in many studies, being thinner than about 127 pounds seems to be associated with some risk of osteoporosis-related fracture. However, both obesity and caloric restriction have direct and indirect effects on bone and calcium absorption that can increase fracture risk.

Around the world about twice as many young women as men at every decile of body mass index perceive themselves to be overweight (Wardle, Haase, & Steptoe, 2006). Almost nine times as many lean women as lean men are actively trying to lose weight.

Although exercise is widely recommended as one of the primary preventive strategies to reduce the risk of osteoporosis, its effects on post-menopausal bone are controversial.

In elderly people, studies indicate that exercise may increase the thickness and resistance of cortical bone at loaded skeletal sites. However, it seems that the improvement on bone strength induced by exercise in older adults is likely due to a lower loss of endocortical bone and/or an increase in tissue density, rather than an increase in bone size, typical of young people.

Studies that test the effectiveness of strength training in the hip and spine show that the intensity and progression of the training is an important consideration. Intensity and continual increase in load (weight) are fundamental to producing an improvement in bone mass rather than simply decreasing loss.

The greatest effect on the neck of femur (hip) was found with progressive resistance strength training for the lower limbs. For example, exercises involving high loads (70-90% of a maximum repetition) for 8-10 repetitions of 2-3 sets performed at least for 1 year, 3 times a week for 45-70 minutes per session. (A full list of exercises is listed below in Notes of Interest.)

The most effective intervention for BMD at the spine has been suggested to be a multicomponent training exercise program, which consists of a combination of different exercises (aerobics, strengthening, progressive resistance, balancing, and dancing). Interestingly, this study found that the most challenging high impact exercises, such as jumping, are only effective when they are associated with other low-impact exercises.

Weight bearing activities, including high impact and endurance components, are most effective in building strong bones. Another way to look at this approach is to ensure your training regimen includes a combination of aerobic and anaerobic exercises.

The key to success is in the ‘progressive overload.’ Just as we increase the distance of our long runs to improve endurance, the skeleton needs a progressively increasing load (weight) to improve strength.

Skeletal muscle becomes stronger in response to a training stimulus, but eventually adapts to the stimulus. Without a new stimulus, or greater demand, the body will make no further adaptations.

Never stop a movement just because you’ve reached an arbitrary rep count; keep going until you can’t complete any more on your own with good form.

Exercise science indicates that to maximize your muscle-building efforts, the point at which you end your set should be in the 8- to 12-rep range. Adding reps indefinitely would improve muscle endurance rather than muscle strength. After 12 reps or so, you should increase the load rather than indefinitely increasing reps. And, as with running, start easy and increase slowly to avoid injury.

Other options for progressive overload include increasing the number of times, or frequency of your workouts; or decrease the amount of rest time between sets. If you are a runner, this may sound similar to the methods we use to make speed-work more challenging as well. The principles are all the same.

The phrase to remember is Stress + Rest = Growth.

Thin, Light… and Fragile
What all runners should know about bone health, Runner’s World

Progressive Overload: The Concept You Must Know To Grow!

Does Lower-Body BMD Develop at the Expense of Upper-Body BMD in Female Runners?

Stress injuries occur more frequently in those with exercise-associated osteoporosis.

How bears keep their bones strong during hibernation

Influence of sports participation on bone health in the young athlete: a review of the literature