We were only a few days away from the start of construction last December when I wrote about a planned one-room addition to our cottage. Then it rained nonstop. It was a miserable winter. Exterior work came to a screeching halt, and we spent the winter working on interior projects instead.

September 2017: the kitchen and living room had been added onto the cottage in the 70s, and never touched again. It’s really better that way I think. The seller had left the cottage furnished, including a rooster in the kitchen – which you can barely see above the door in the photo below. The paneling had darkened around the rooster over the years, and I put him back in exactly the same spot after the remodel.

October 2018: our initial plan was to put the cottage on the vacation rental circuit for a few years. This picture was taken just before we changed our mind and decided to live here ourselves. The kitchen’s footprint is the same, but it seems larger with the wall fully opened to the living room. 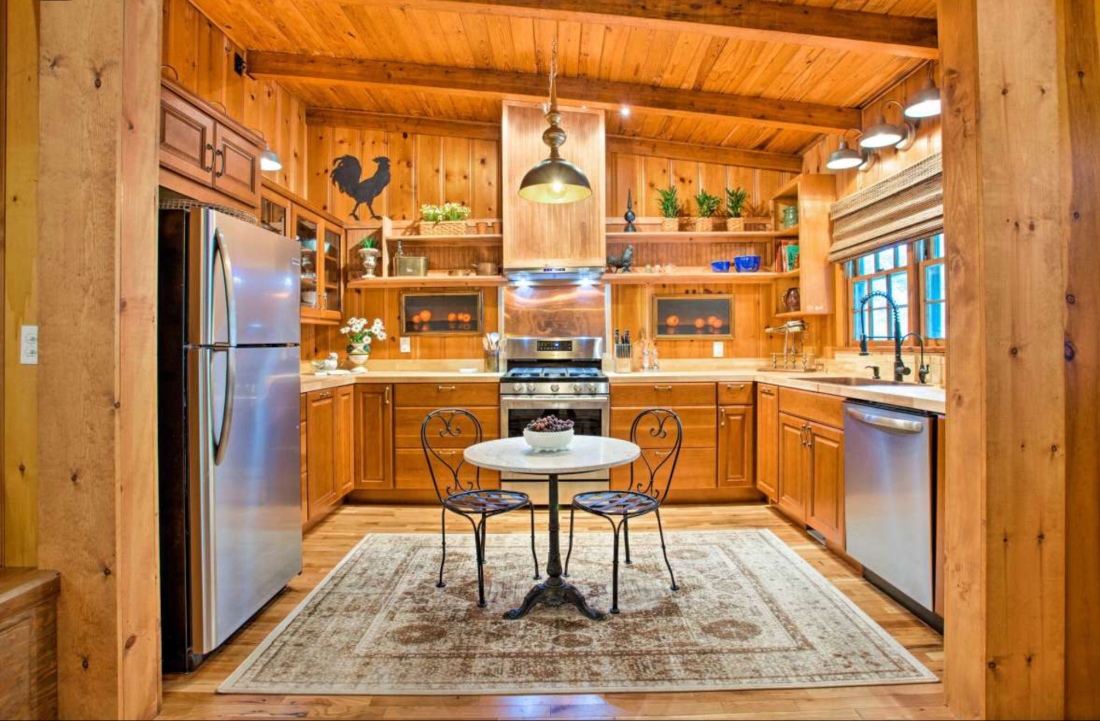 I really loved the look of the kitchen, but it had practical issues. It was difficult to completely conceal the patchwork done to the paneling after closing off the original door and window on the back wall. A marble backsplash hides this world of sins.

The next issue was the appliances. Since the refrigerator was not counter depth, it extended too far into the room. Same problem with the dishwasher – when the door was open it was impossible to move around. The ice cream parlor table and chairs are adorable, but miserably uncomfortable and too small for everyday use.

April 2019: Over the winter, we replaced the standard dishwasher with dishwasher drawers, added the Bosch refrigerator with black glass door panels, switched out the chandelier, and exchanged the rug for a cowhide. We also re-stained the vent hood a shade darker than it had been, changed out the table and chairs, and opted for blinds instead of the ‘all-or-nothing’ shade. I’m on the hunt for swing-arm sconces, and a black stove is on order. 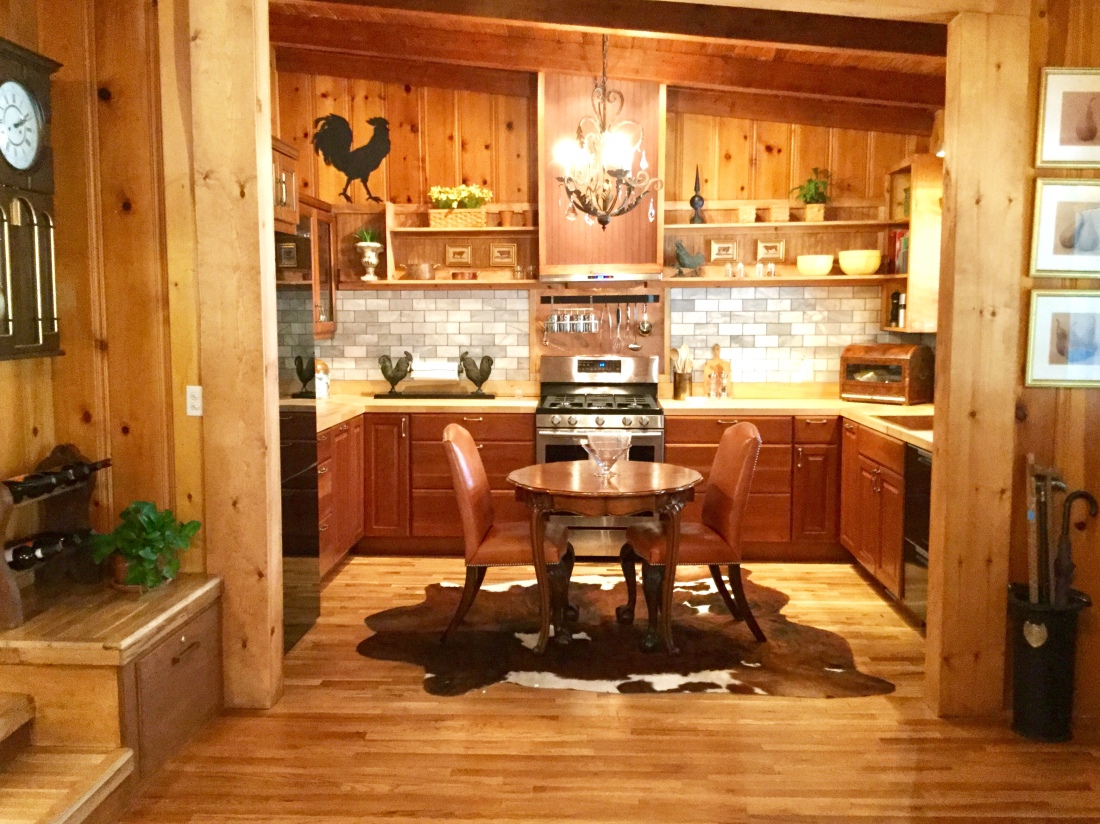 September 2017: the living room was in pretty good shape. I’m not sure the fireplace had even been used. I love all of the wood in this room and the large front window. However, the fireplace isn’t center on the wall, which makes me a little crazy. And the paneling had darkened around the bookshelves leaving an outline of the shelves when they were removed – just like the rooster. Eventually we painted the back wall white, and then re-painted it a pale shade of grey-green this winter. With great hesitation, we painted the fireplace too.

January 2019: We liked the fireplace painted white, but it seemed harsh – almost too white. My husband remembered a container of black glaze in the closet from another project, and we used it over the white. This last step softened the white just enough and allowed more of the brick to show through. 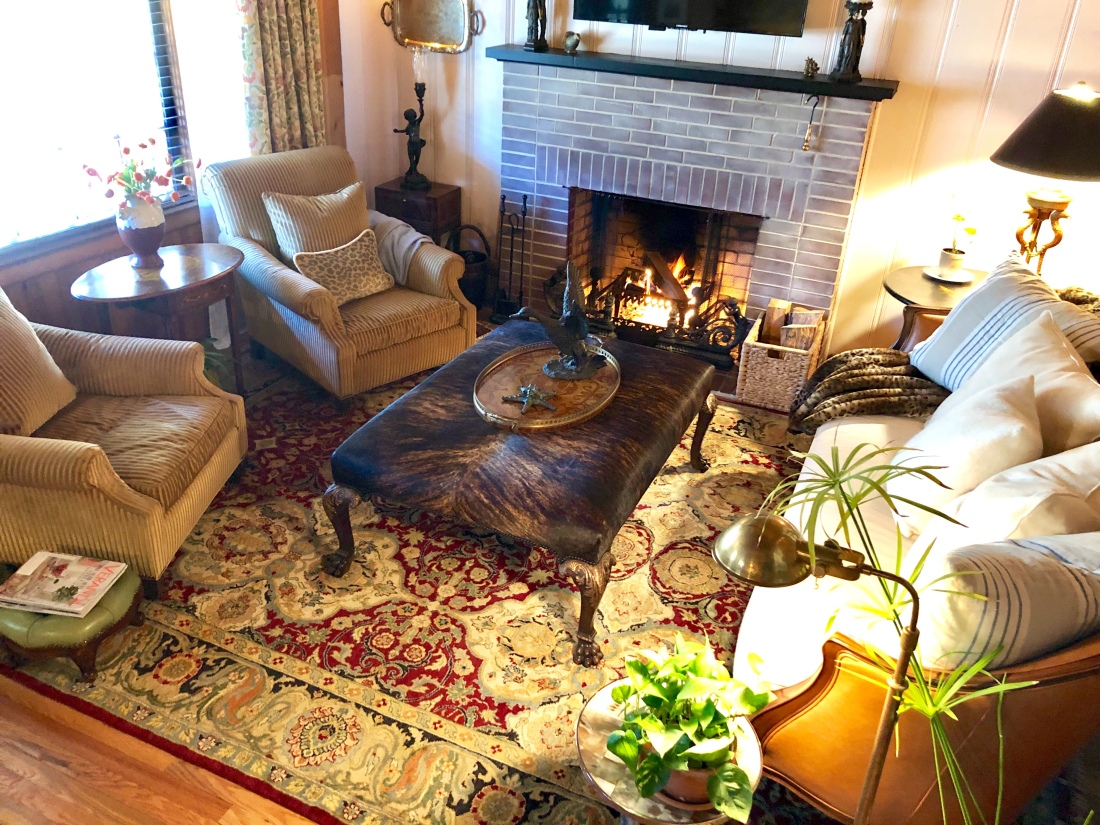 We snapped this picture of Bentley playing with Mr. Boggs in January when the wall was still white and before we experimented with the fireplace. 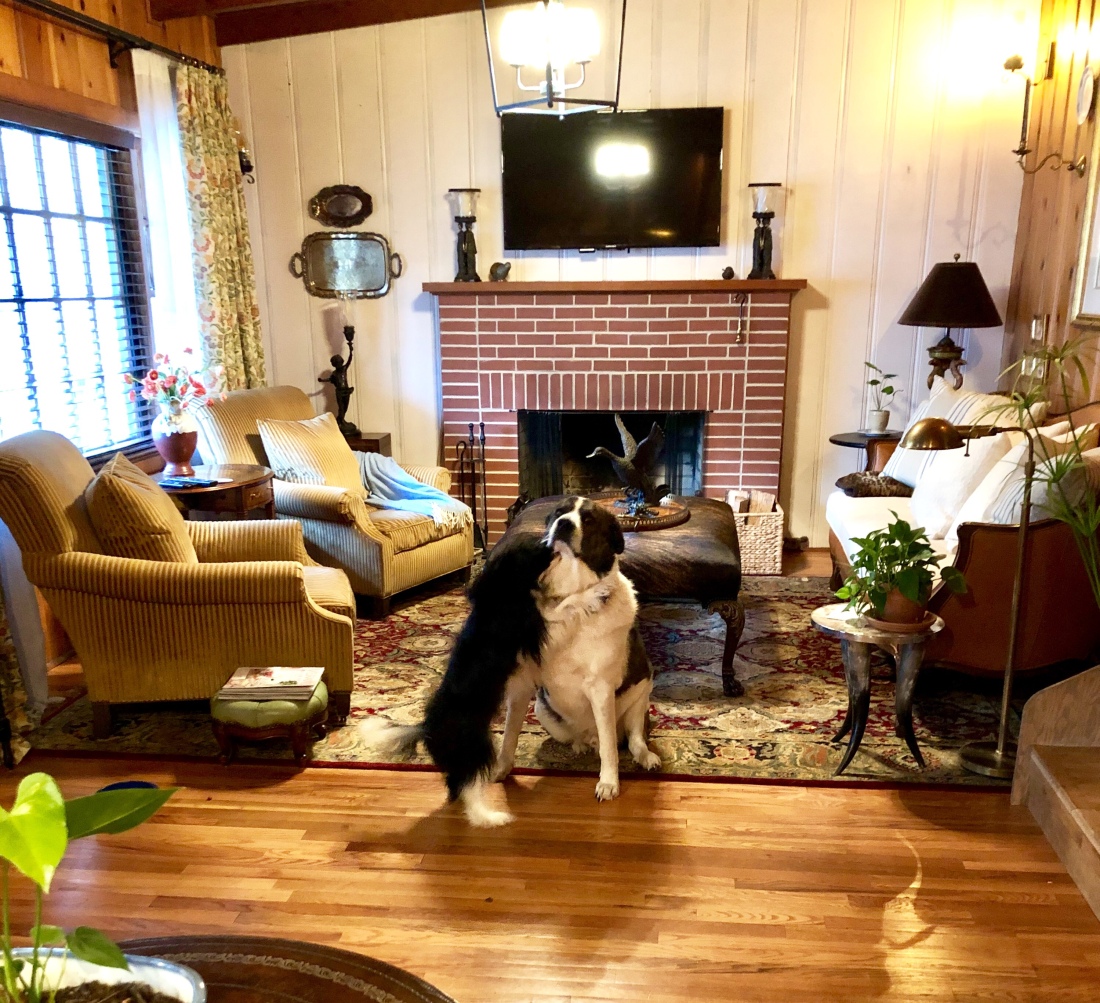 After four days of excavation last week the rain started again. Dump trucks came one after the other all day every day to export dirt from behind our house to some unknown location nearby. A couple of days into the process I remembered to ask them to leave some of the rocks for landscaping, and now we have a pile of rocks so large we’ll never summon the strength to move them ourselves. The sheer number of these large rocks leave us all convinced there was a rock wall at some time in this land’s past. Otherwise, the only buried treasures were a handful of old bottles and a tire.

By this time next week, we hope the dirt will be gone, the back yard will be flat – or at least partially flat, and there will be endless days of gardening ahead of me. Said differently, I’ll be in heaven.