It has seemed insensitive to write about everyday life when everyday life has been so disrupted for humans everywhere. My husband and I are in our fourth week of self-imposed lockdown. I do wish I had gotten my hair cut before we started, and I would have liked to shop the local garden center for spring plants just once, but we’ve survived fairly well just being on our own.

We’ve ordered groceries online twice, and tipped handsomely for home delivery. Last week I washed every item before putting it away, but we’re not sure whether this extra step will become a lasting habit. Some days I wonder if I really need to wear a bra, or put styling gel in my hair for every single day of this lockdown, although so far the answer has been yes to both. The only place I feel completely safe is in the shower, and the garden. There is not even the slightest inkling of lockdown in the garden.

The gym, coffee shop, ice cream parlor, playground, restaurants, and all indoor spaces in our neighborhood have closed. The trail around the lake became so congested that it was converted to a one-way course to help folks maintain proper distance. I’ve taken to walking the streets, which includes a fair amount of climbing since every street travels ever further up the mountain. I took this picture earlier this week on my way back down toward the lake. 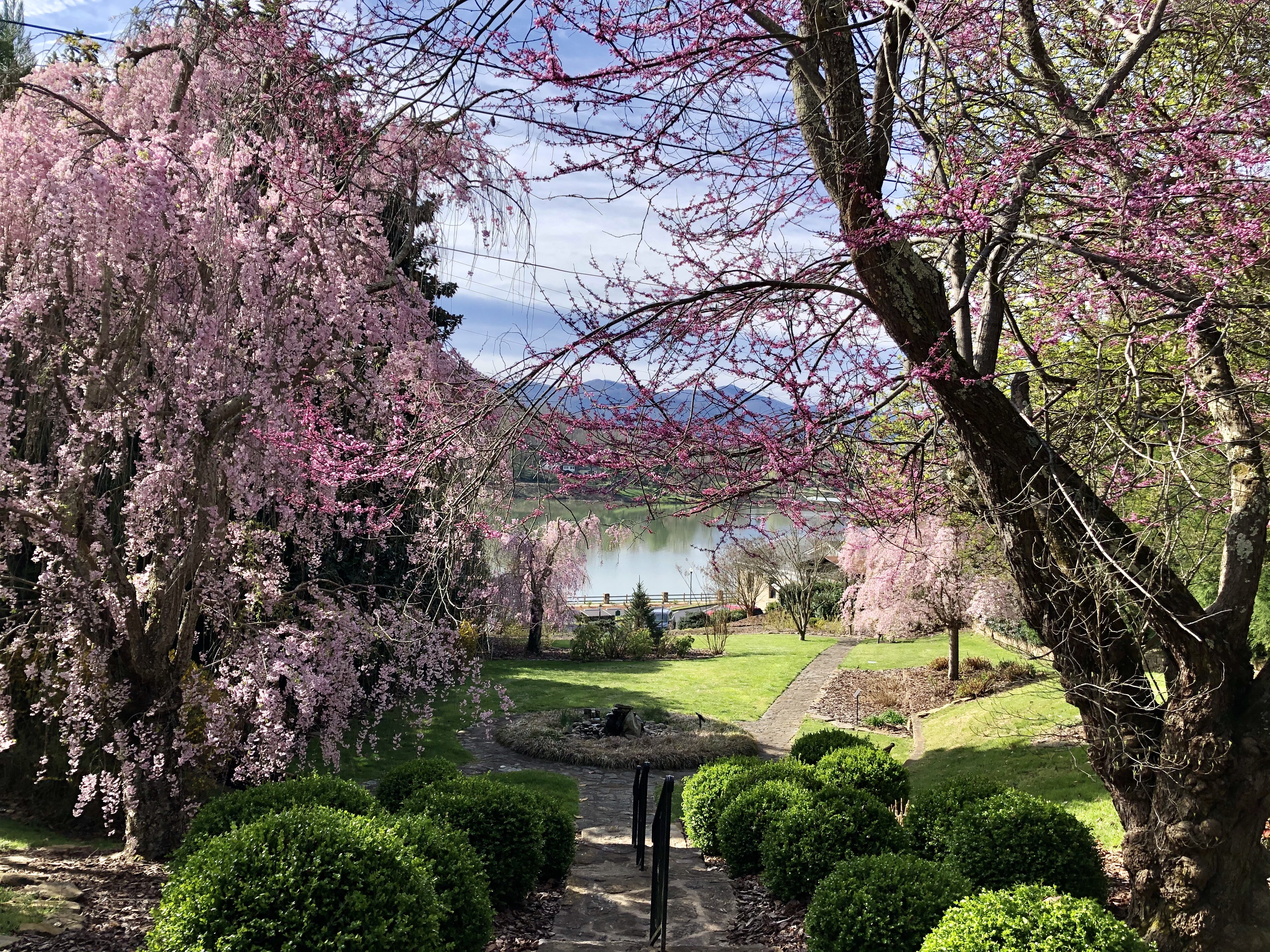 Master Gardening school was cancelled, including the graduation ceremony planned for early May. We studied the chapters on small fruits and woody ornamentals on our own time, answering the quizzes by email as if nothing unusual was taking place all over the world. Then someone had the idea to video-conference class, and this week we held our class by ZOOM. I’ve never ZOOM’d; never even heard of ZOOM. Somehow we managed to not get ZOOMbombed in the process, and after three hours’ time we had covered lessons on garden vegetables, pests and weeds. Who would have thunk. 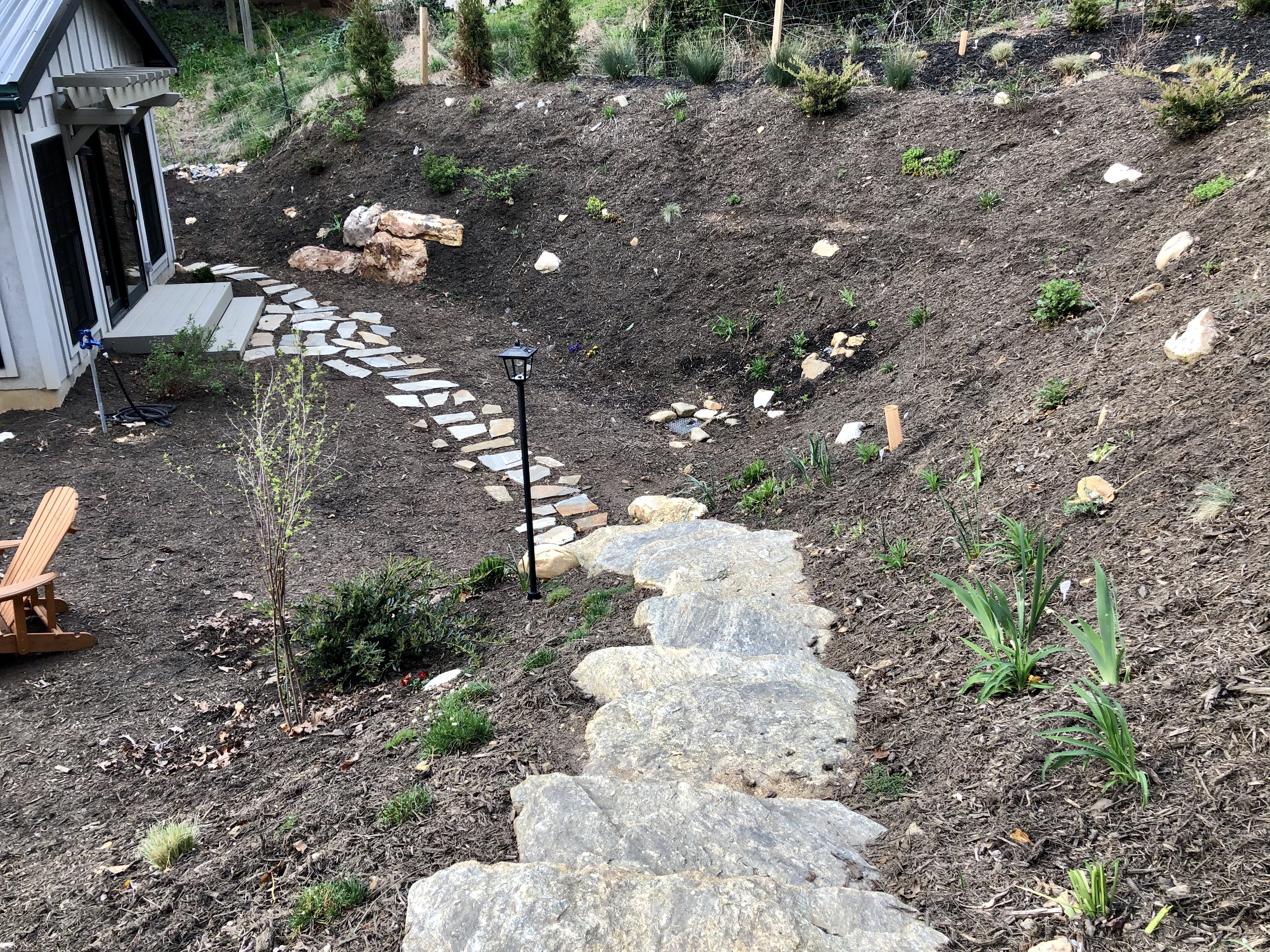 Three loads of mulch were delivered during the first week of lockdown. Some day I am determined to have a garden that doesn’t require so much mulch, but Mark and his guys had a lull in their schedule, and we were lucky to have their help for several days to toss that mulch all around. That’s when my husband decided we should also attack the wet and mucky side walkway. A flagstone path seemed to be the right answer, and there were just enough stones in one pallet to reach around the corner and all the way to the steps toward the upper yard. This narrow walkway is begging for an inspired design, and it’s high on my list of gardening projects. 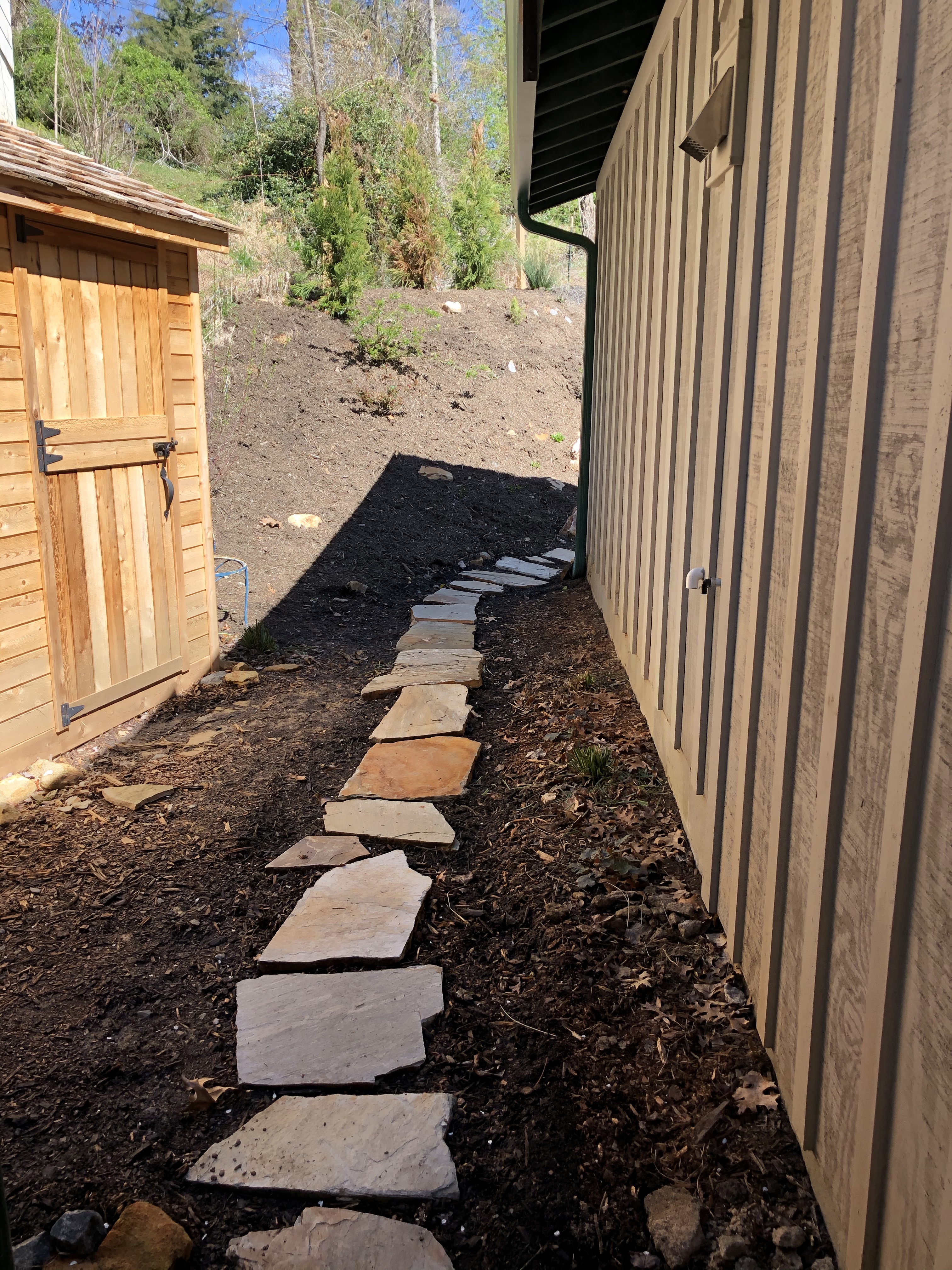 During lockdown weeks two and three, things began to break out through the mulch seemingly overnight. The rose bushes, Montouk Daisies, and all the lavender plants have turned green. Unfurled fern fronds stand tall beside emerging hostas, and the trillium I salvaged the day excavation began last year has miraculously re-appeared. The climbing hydrangea have tiny buds in a subtle promise that blossom-laden vines will reach places far and wide in the weeks ahead. 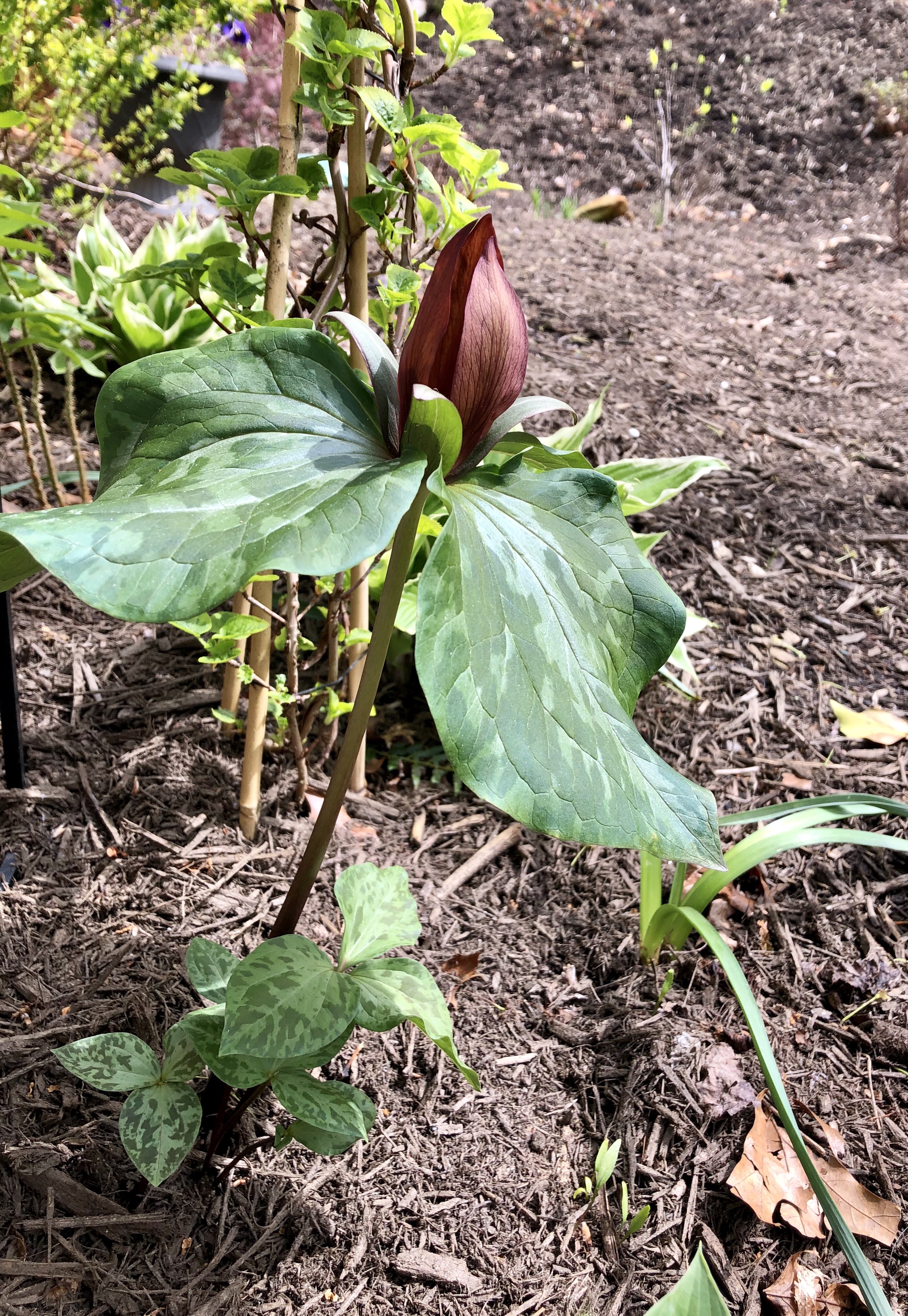 The Creeping Jenny I indifferently stuck in the ground two years ago could very well take over the front garden this summer, and now I’m having second thoughts. I’ve pulled armfuls out and thrown it behind the shed where it can run amok. Perhaps one hundred years from now when Creeping Jenny has crept throughout the land, some irate gardener will trace its origins to my garden and wonder why on earth I would have done such a thing. 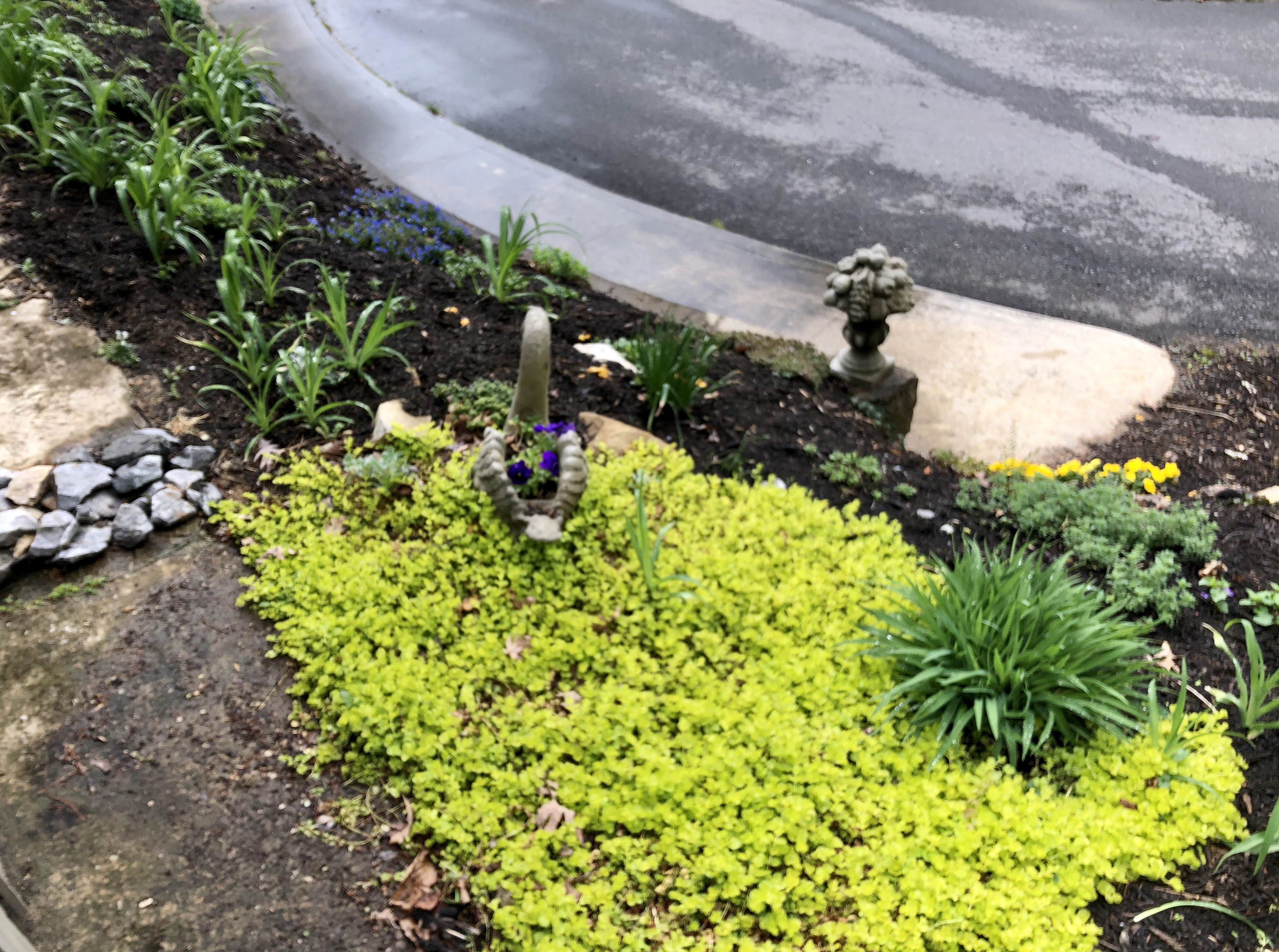 Late last year I planted ten bare root trees from the Arbor Day Foundation, and surrounded them with protective covers. If you peek inside the cover, you can see they have developed little leaves, which is pretty exciting. This tiny tree is a Hawthorne. 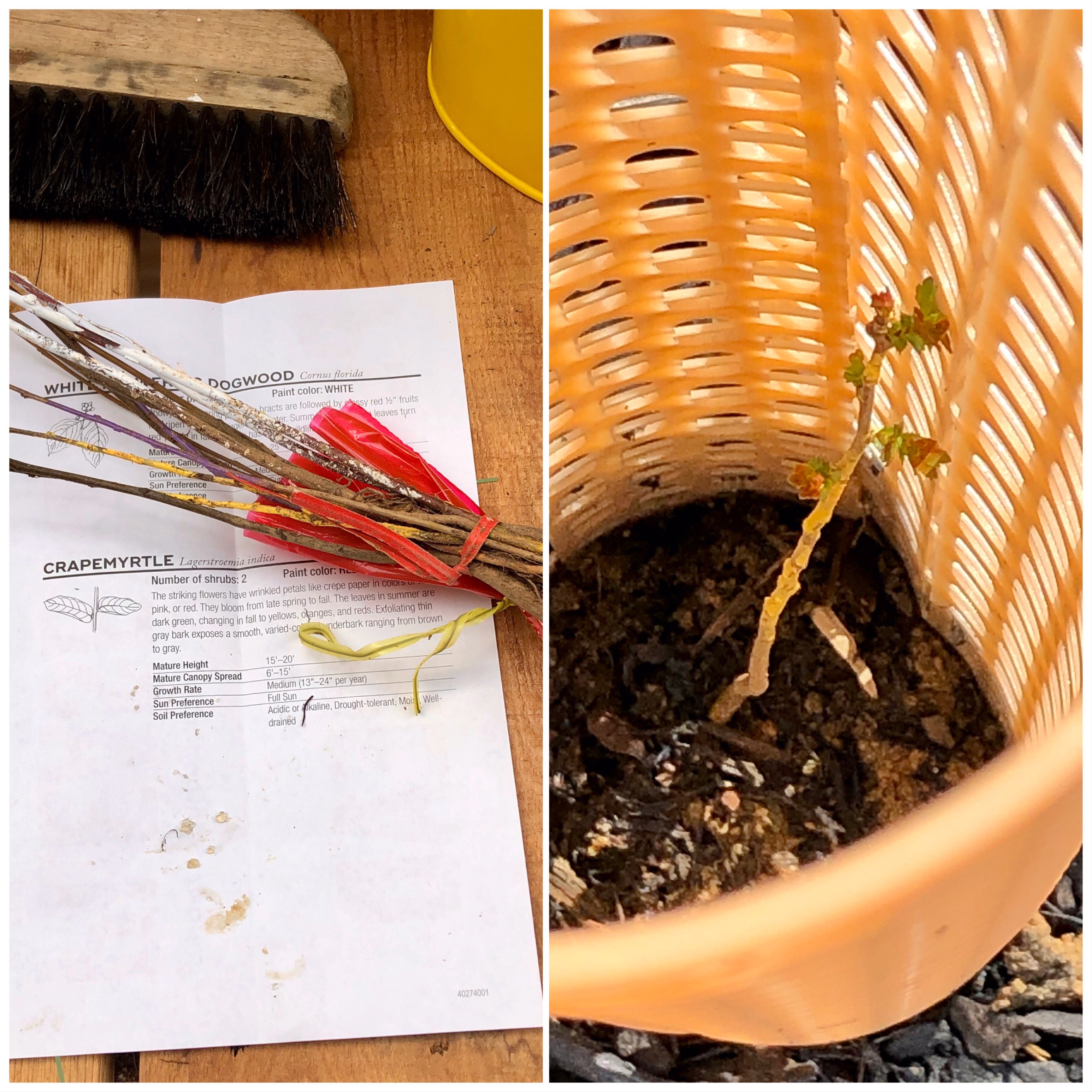 I’ve searched everywhere for plants that will survive the underground spring in left field. Lilies were an easy answer, but the Elderberry apparently also tolerates some degree of wet feet, so I moved it just a few weeks ago to a moist spot above the rocks. It’s completely invisible in every photo, but there are signs of life with tiny leaves all over its spindly frame.

Last summer I had also added Cana Lilies to the spring area, but quickly changed my mind and moved them to the side yard. It didn’t matter. A few have returned after all, so I guess I’ll leave them alone this time. My dream is that some day this difficult area will become the focal point of my summer garden with bulbs blooming en masse.

A fellow gardener once told me that a gardener always sees what their garden can become rather than what it currently is. Case in point. . . 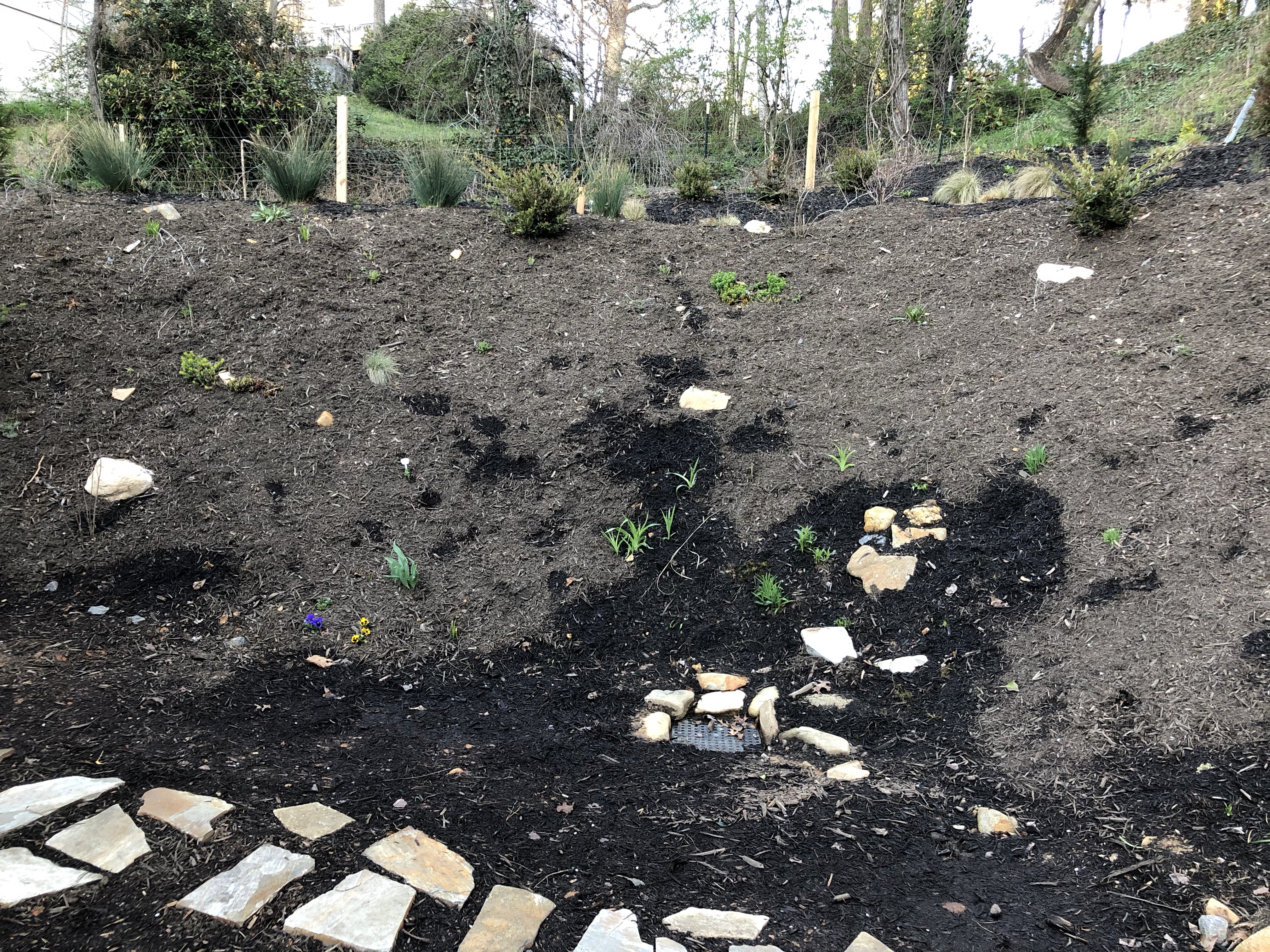 I can’t help but stare out the window and watch my garden grow. Every day there’s a new job to finish, a tender new plant to notice, or a grand idea to ponder. It still looks bleak in many ways, but I feel confident in its potential even still. 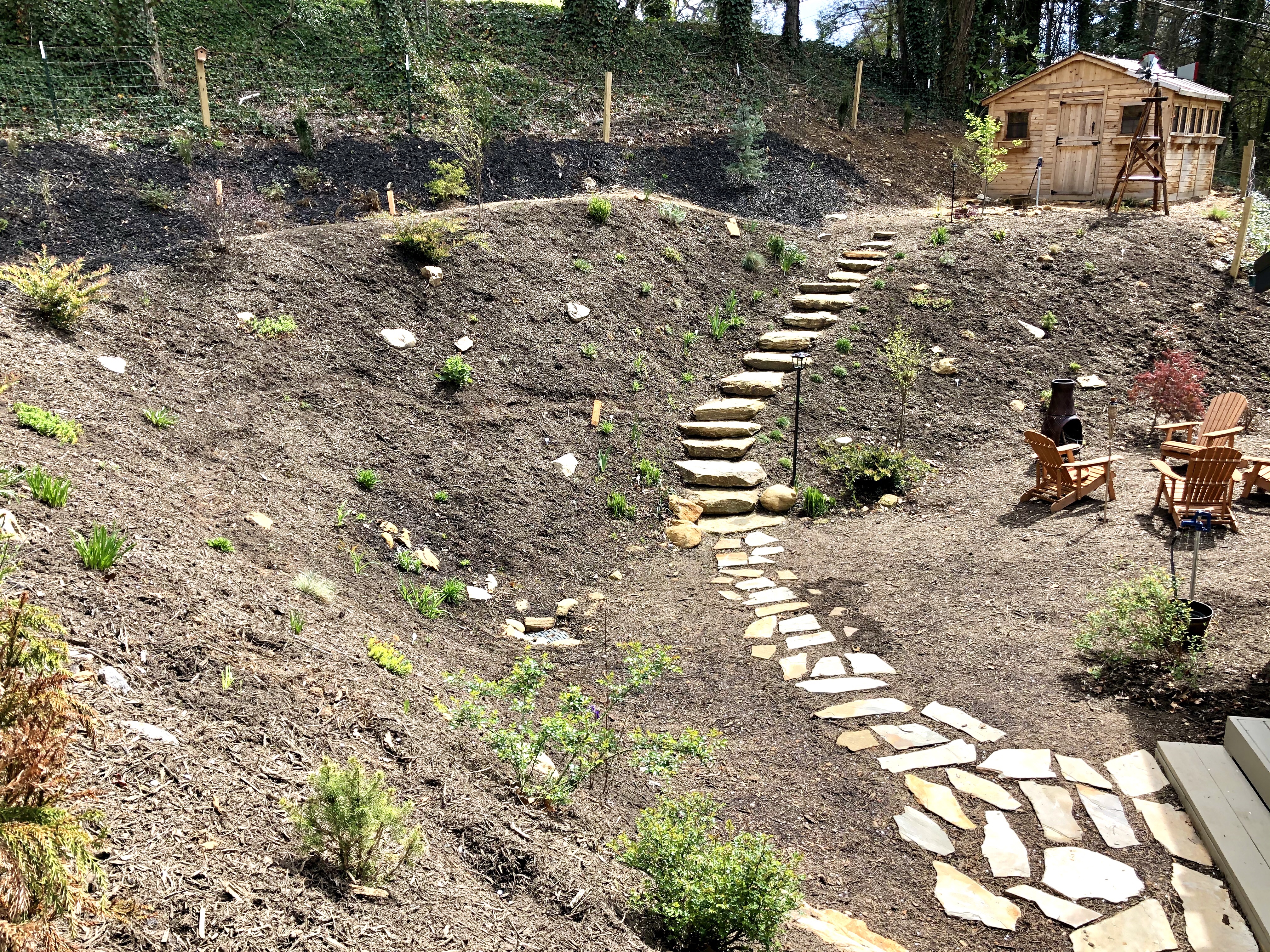 The daffodils were beautiful in the front this year, but I got busy and forgot to take a photo. Meanwhile, the day lilies have arrived in some multiples greater than last year, which will probably dictate a relocation project for later this fall. 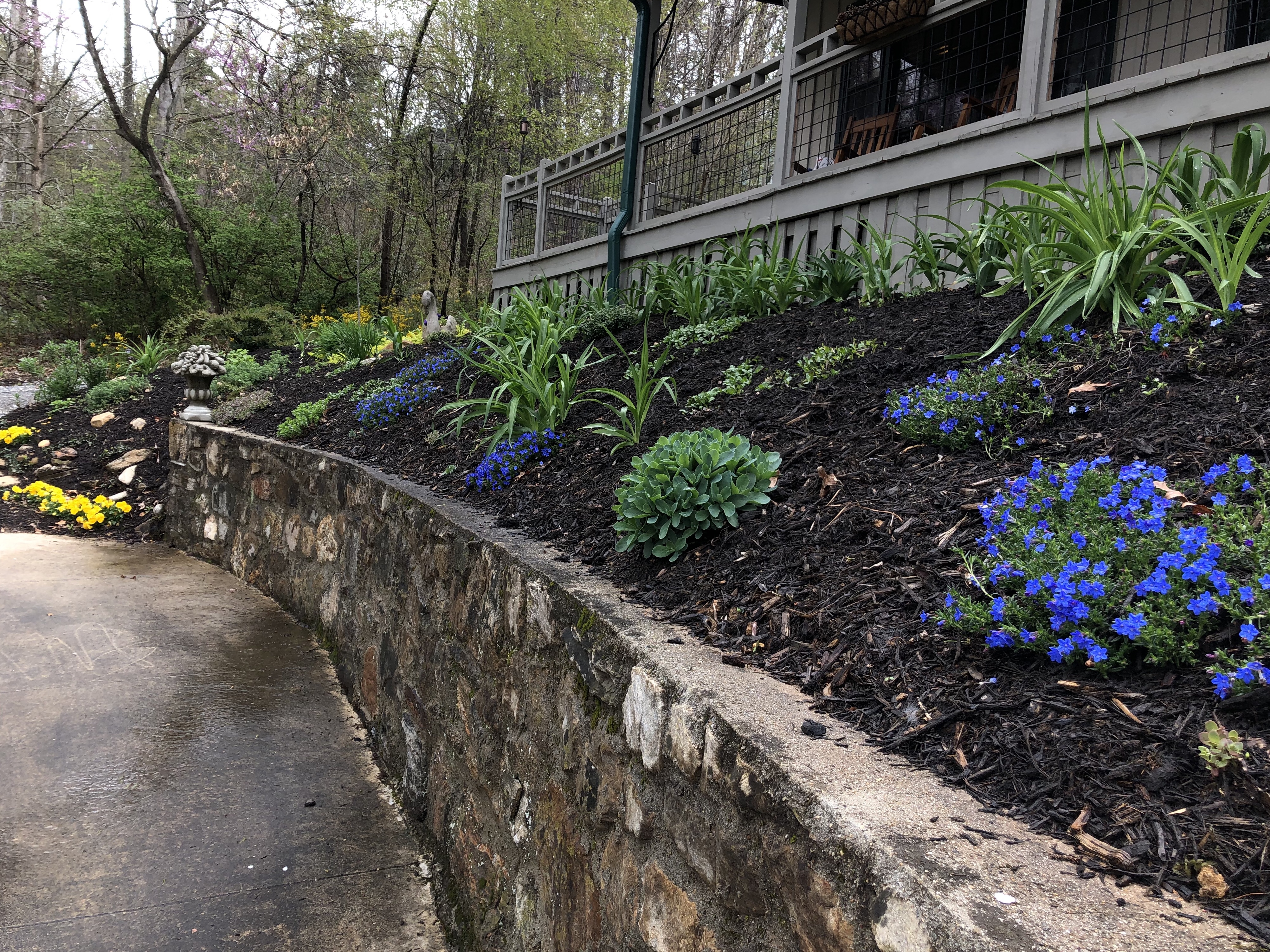 I could write 500 words about the fascinating job of pruning, but I’ve finally learned the most important lesson of all: when not to prune. The Montouk Daisy is one of those woody ornamentals that prefers new growth on old wood. In the absence of my severe pruning, as in years past, it’s standing tall and strong for the first time. 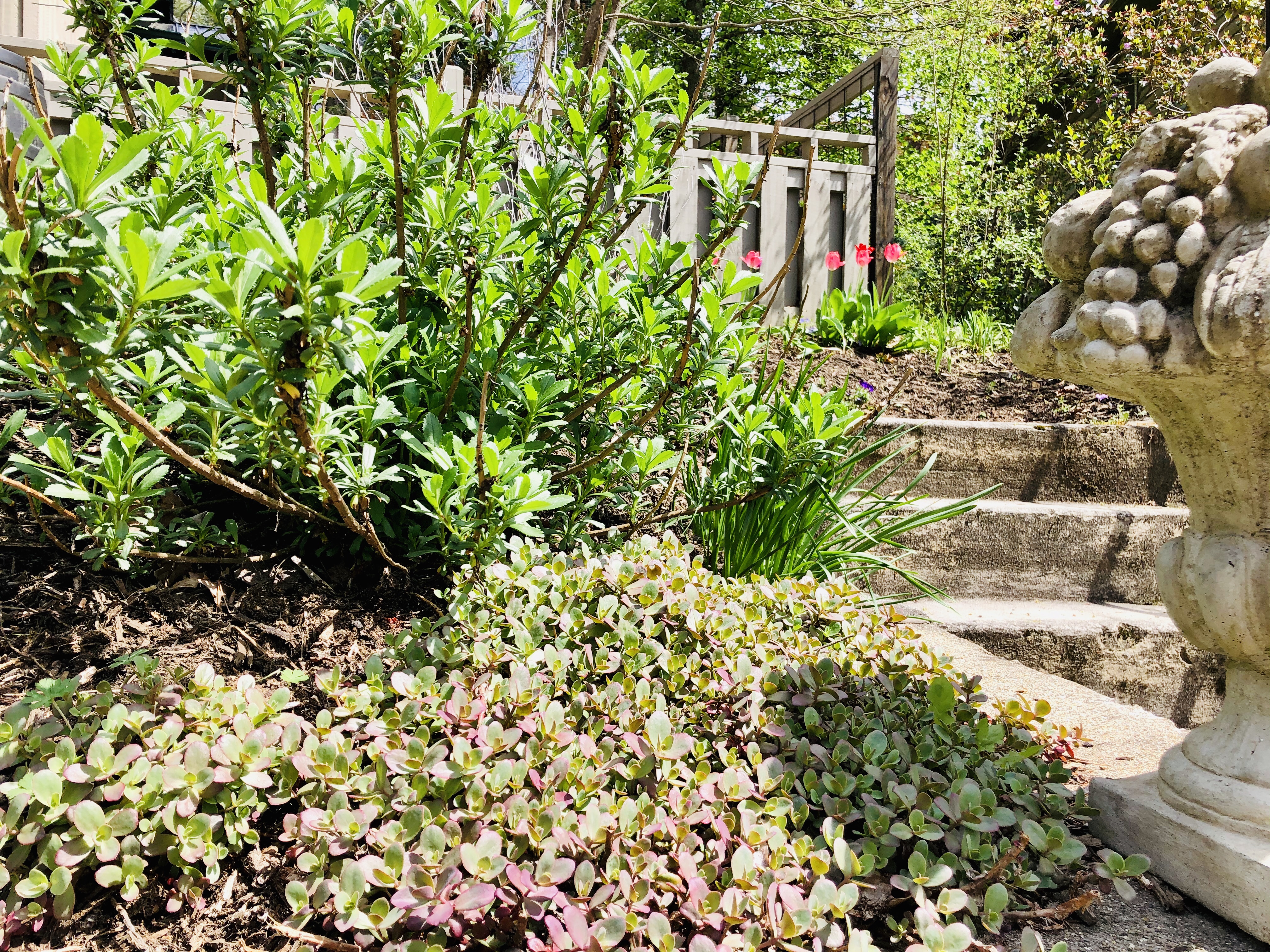 Small clumps of viola grows all along the edges of the sidewalk where they faithfully return every year. Or, maybe they never leave. 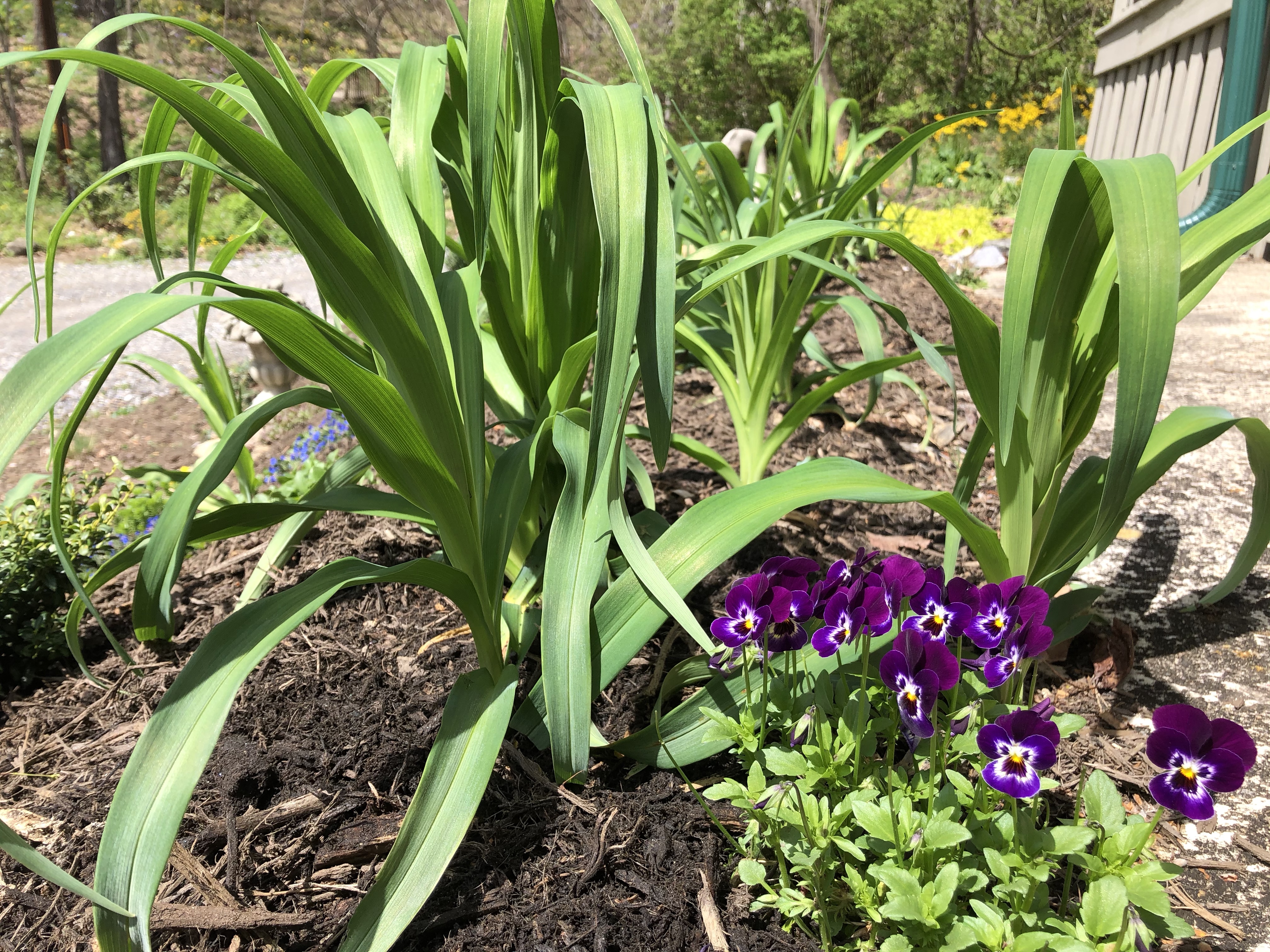 There was a mystery bulb on the garden center clearance cart last summer priced at just $1, but the nice lady at the register dropped it in my shopping bag for free since no one could identify this strange bulb. A few weeks ago, it finally revealed itself. There’s an experienced gardener somewhere that recognizes this plant already, but I have yet to figure it out. 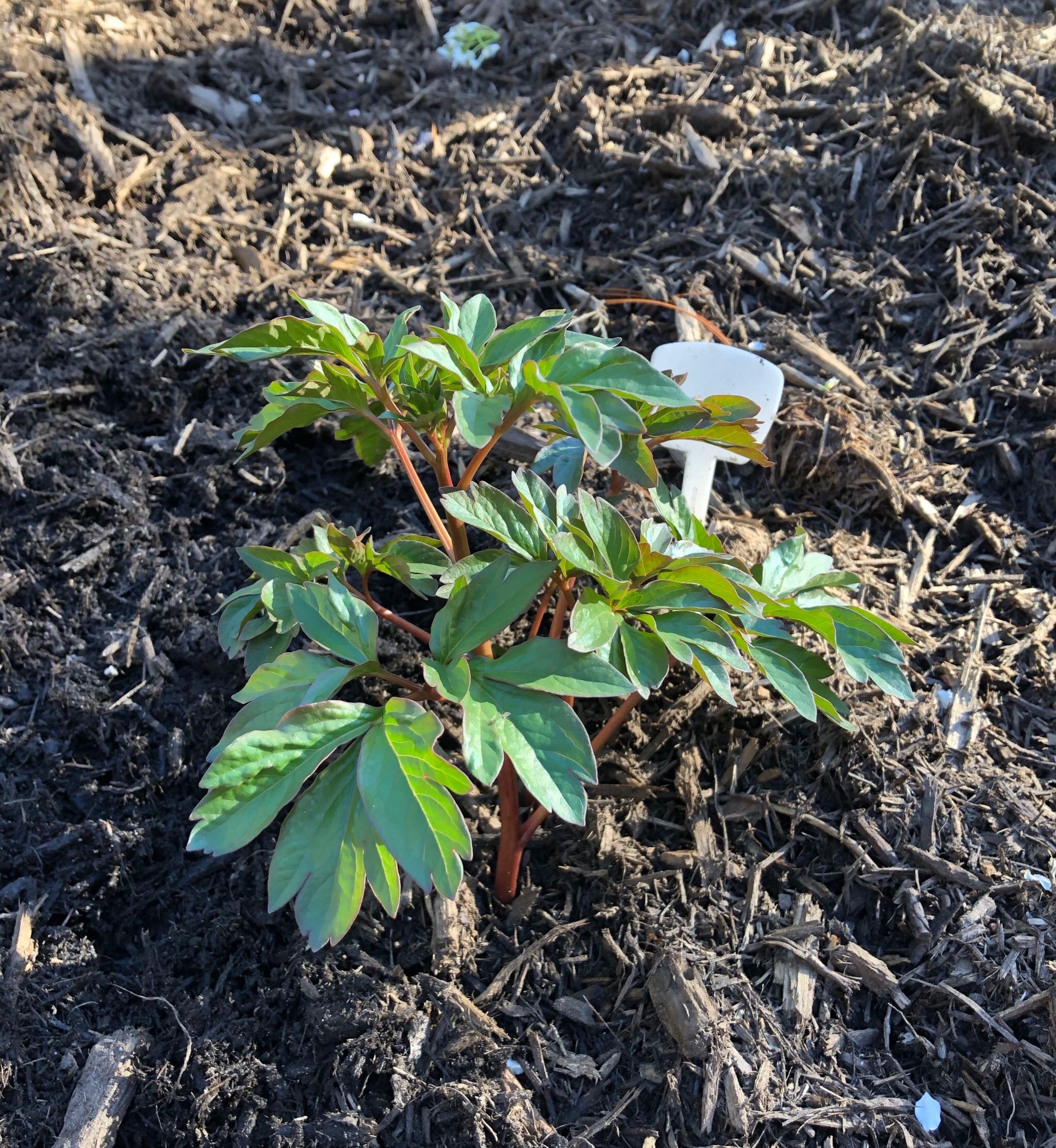 Another surprise came along on Monday in the mailbox. I had made a second small donation to the Arbor Day Foundation a few weeks ago, and they replied with thirty Ranunculus bulbs (buttercups). Hopefully I’ll remember all the places I’ve planted them, and hopefully they’ll look just like this picture.

Until next time, be well. My heart is with you all. 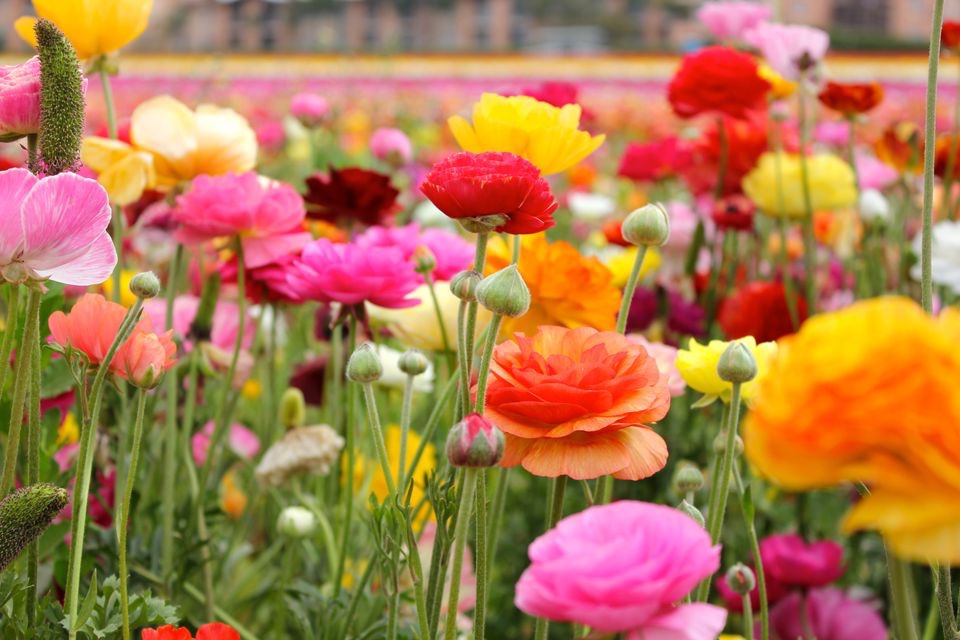 Test Your Knowledge on Woody Ornamentals:

2. True or False: When planting a bailed and burlapped plant, leaving the burlap exposed above ground level provides an extra moisture reservoir.

3. What problems can occur with volcano mulching?

a. Tree roots can grow into the excessive layer of mulch.

b. Mulch too close to the trunk allows voles to access the tree to chew the bark.

c. Mulch touching the trunk may cause bark decay.

d. All of the above. 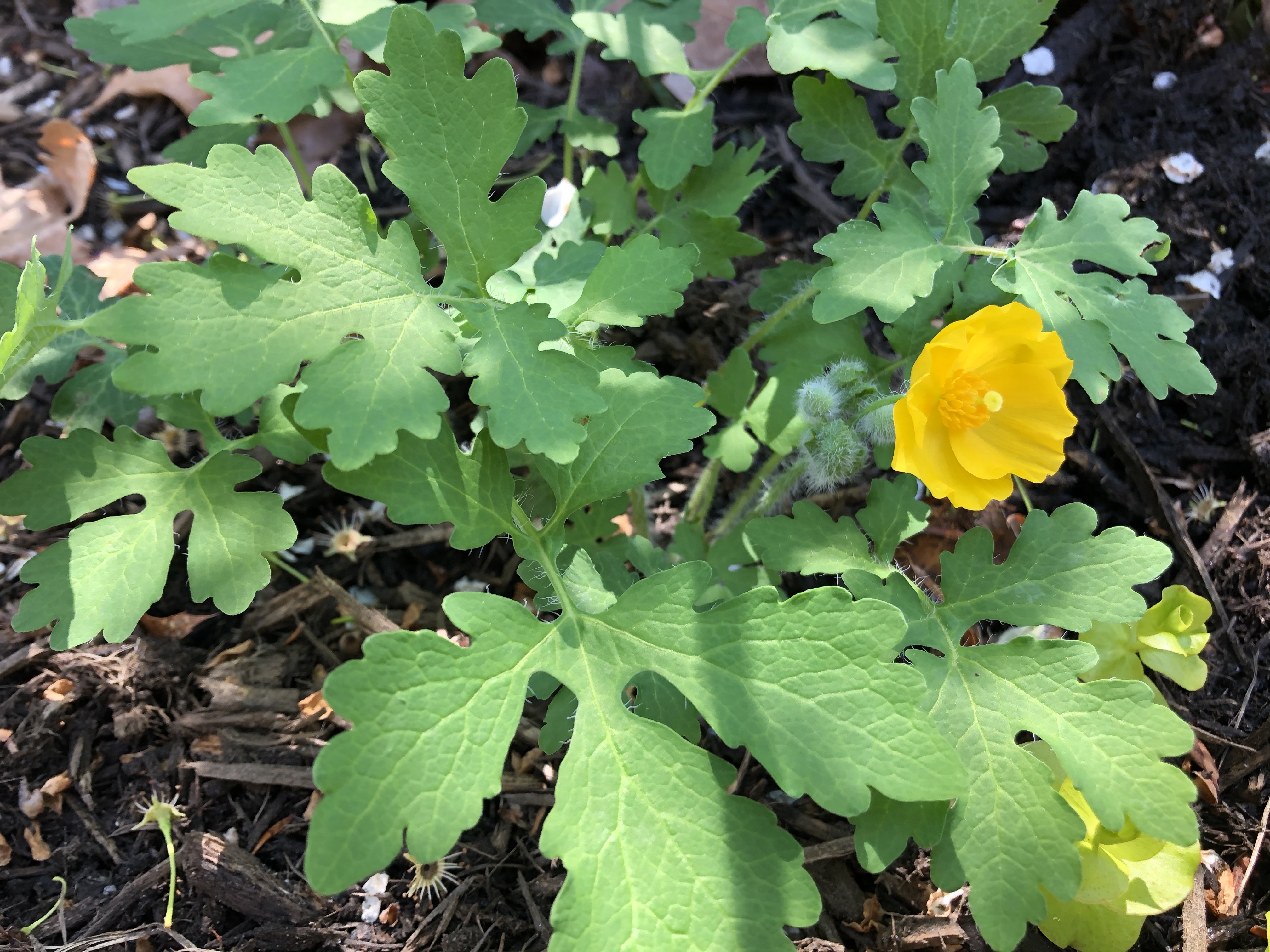 2. False: exposed burlap will act as a “wick” pulling moisture away from the rootball. 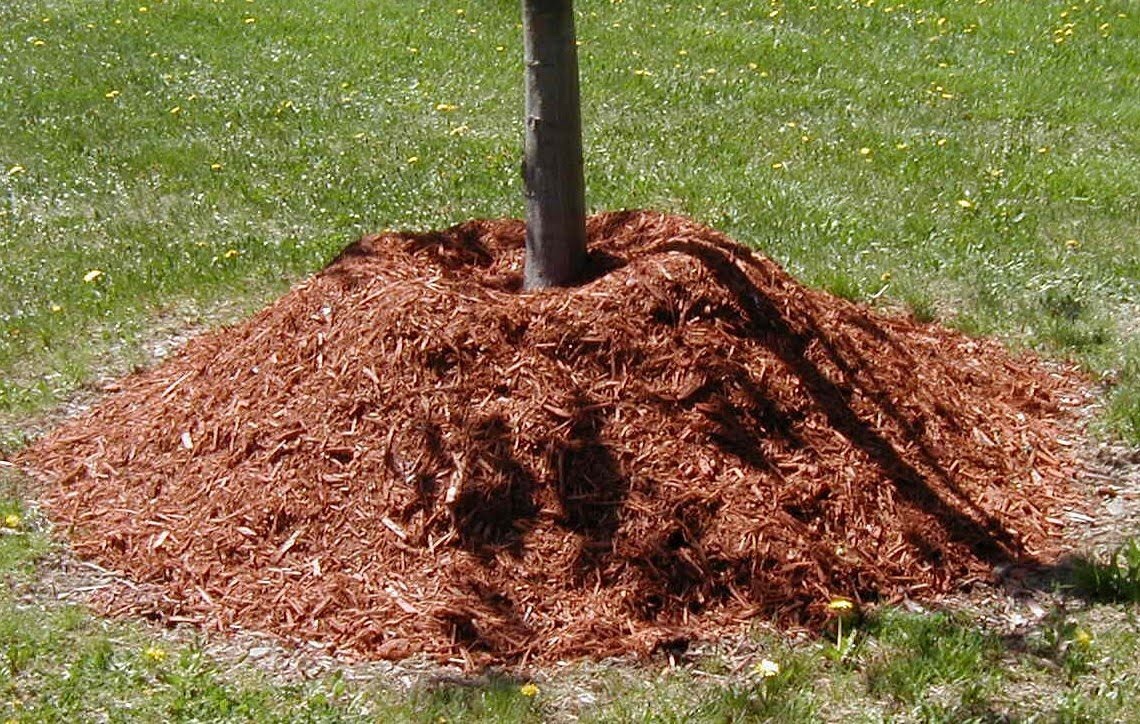